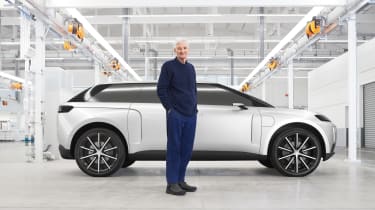 This is what would have become Dyson’s first production car that was due to launch in 2021. The SUV was created as an all-electric vehicle designed to take on the Tesla Model X and Jaguar I-Pace.

Patent drawings of the car first surfaced early in 2019, and then this sole profile image of the car with company founder Sir James Dyson was released to showcase how the final design had evolved from patent to prospective production before the project was dropped by Dyson.

The car pictured is only a painted clay model, but it goes so far as to feature headlights and tail lights, flush, pop-our door handles, small, aerodynamically efficient wing mirrors and even a charging flap, located on the near-side front wheel-arch. A second shot reveals what could have been the basis of the unnamed model’s interior, featuring long, flat surfacing and robust textile upholstery.

The Dyson car project was cancelled in October 2019, and Dyson has paid back a £7.8 million grant to the Government. Dyson received the grant in 2016, amid expectations that the project would bring an engineering and employment boom in the company’s home county of Wiltshire - although he subsequently announced that the car would be built in Singapore.

Before Dyson abandoned its electric car project, the company revealed that Government funding had been provided for its automotive project, which included new R&D and education departments. Despite canning its electric car, Dyson is still continuing to work on solid-state battery technology, which the company is funding itself, for use in its other businesses.

At the time, a Dyson spokesperson said: “The day after we told our people about the proposed project closure, we contacted BEIS (the Department for Business, Energy and Industrial Strategy) and have now repaid the money.”

The electric car was due to be launched onto the market in 2021. Dyson added that “this is not a product failure, or a failure of the team – their achievements have been immense given the enormity and complexity of the project.”

Before the project was axed, Dyson’s car division employed around 500 people in the UK.

The company’s most recent official statement concluded: “Since day one we have taken risks and dared to challenge the status quo with new products and technologies. Such an approach drives progress, but has never been an easy journey – the route to success is never linear. This is not the first project which has changed direction and it will not be the last.”

Dyson's electric car: what could have been

The first details Dyson's electric emerged at the beginning of 2019, after patents awarded to the firm were made public. The British technology company was considering seven-seat crossover with unusually large wheels for a vehicle of its size. Our exclusive image previewed how it could have looked when it was still due to arrive in 2021.

When the drawings were made public, Dyson emailed the Auto Express office, stating: “The patents certainly don’t reveal what our vehicle will really look like, but they provide a glimpse of some of the inventive steps that we are considering. They suggest some of the ways in which this vehicle could differ from the status quo and depict a vehicle which has been developed, from the bottom up, with range and efficiency in mind from the outset.” 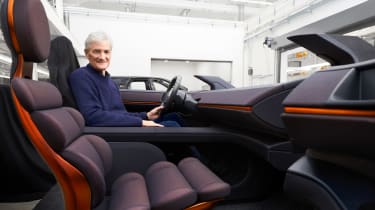 The profile drawings in the patents showed a vehicle that appeared to mix both SUV and saloon design traits – lifting the cabin space up (presumably to facilitate battery installation in the floor), while still keeping the roofline and centre of gravity reasonably low - something apparent on the full-size clay model. As a result, the seats seemed to be reclined significantly more than you’d find on many conventional SUVs.

The patent documents reflected this, saying: “The ground clearance of the vehicle in the illustrated embodiment is about 300mm, which is comparatively high as compared to saloon or sedan-like vehicles, although the front row of passengers are supported within the vehicle in a more low-down, sedan-like seating position”. And it adds, “The driver has a reclined seating position typical of a saloon or sedan vehicle.”

Dyson was proposing to give the car a relatively long wheelbase – between 3,200mm and 3,350mm – to accommodate this; the firm says this could have helped to improve ride quality, as well as allowing a larger battery pack beneath the cabin for increased range.

Further documents said that the example vehicle could have been between 1,600mm and 1,800mm high and that it would be “preferably between 4,700mm and 5,000mm in length”, and probably no longer than 5,100mm.

These numbers were indicative at best, but they would have delivered a car that was roughly the same height as a Range Rover Sport but, potentially, longer overall than the full-fat Range Rover. The vehicle width “may be less than 1,975mm,” which would make it wider than a Velar but narrower than a Range Rover Sport.

The ground clearance envisaged by Dyson would have been higher than the large Range Rover’s, though, and the proposed wheelbases were supposed to be longer than even that of a Rolls-Royce Cullinan. The illustration in Dyson’s patent documents also shows a car with 24-inch wheels, and that the car may have wheels whose outer diameter comprises 45 to 55 per cent of the overall vehicle height.

This is particularly clear from the front-on drawing of the illustrative vehicle, which shows how much of the wheel would be within the car’s body – and how the narrow choice of tyre would help minimise intrusion into the cabin. Dyson said this engineering choice would help to avoid aquaplaning, give better grip in snowy conditions and reduce aerodynamic drag.

In Dyson’s email, he also told his employees, “I’ve long been fascinated by wheels and how they were used in engineering icons like the Issigonis Mini and the Moulton bike. I suppose we’ve essentially considered the opposite! The patents show a car with very large wheels, giving a low rolling resistance and high ground clearance. This makes a vehicle suited to city life and rough terrain, but could also contribute to increased range and efficiency.”

He did add, however, “It is important to keep this in perspective and remember that we do not always use patents or make products based on patents that we have filed.” 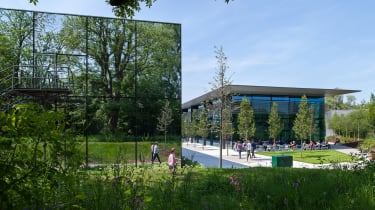 The documents made no reference to which battery technology the Dyson car would have used. Dyson himself has previously stated that his team were evaluating a number of next-generation solid-state battery technologies, although there has been speculation that these systems may not be ready in time for the car’s arrival on the market, forcing the use of existing lithium-ion technology instead.

Dyson concluded his note to staff by saying the project is “on track to launch in 2021” although depending on his definition of “launch”, this may, in fact, represent a small delay compared with his initial statements, when he said, “We hope to bring out an all-electric car in 2020.” As it happened, the project was pulled in October 2019.

Dyson electric was to be built in Singapore

The Dyson electric car was due to be produced at a factory in Singapore. The UK firm had 500 staff working in a Wiltshire R&D centre on its EV, however the new electric vehicle was going to be made in the Asian country, where Dyson already has a factory producing electric motors.

Construction had already begun on the new plant and it was due to be completed in 2020, in line with Dyson’s plans to start selling its electric vehicle by 2021.

In a letter to staff, Dyson’s CEO Jim Rowan said: “Singapore offers access to high-growth markets, as well as an extensive supply chain and a highly- skilled workforce. It has a comparatively high cost base, but also a strong bias towards developing and using advanced technologies.

Although construction of Dyson's EV would have taken place in Singapore, the new car was being developed at Hullavington, an ex-RAF airbase in Wiltshire. Dyson submitted a new planning proposal to develop the facility, taking its investment in the site to more than £200m.

The plans show a range of test tracks that Dyson claims total more than 10 miles. These routes include a dynamic handling track, a large asphalt area to evaluate vehicle stability control systems, an off-road route, a fast-road route designed to replicate motorway driving, test slopes and a handling circuit.

Rowan said: "Our growing automotive team is working from Dyson's state-of-the-art hangars at Hullavington. It will quickly become a world-class testing campus where we hope to invest £200m, creating more high-skilled jobs for Britain. We are now firmly focused on the next stage of our automotive project, strengthening our credentials as a global research and development organisation."

The Dyson electric car engineering project was being led by former Aston Martin man Ian Minards. The firm also recently applied to extend its 'Digital Motor' trademark to automotive use – although, given the current state of affairs, it looks as though the company's motor technology won't find use in an automotive application any time soon.

Click onto page two for our interview with Sir James Dyson...