Behind the front line of car manufacturing are the specialist component makers. We see why this £4bn-a-year industry is booming in Britain 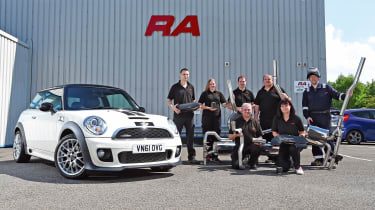 It’s remarkable the difference three millimetres can make. By cleverly engineering this tiny gap between the carbon fibre trim surrounding the titanium and steel exhausts, it’s possible to prevent the carbon fibre from heating above 150 degrees Celsius, even when the exhaust itself glows to 600 degrees.

The development allowed Red Arch – an engineering company based in Northamptonshire – to be the first in the world to produce carbon fibre exhaust trims, and in the process, secure a lucrative deal with BMW. The trim can now be found on the latest M2, M3 and M4, along with the MINI John Cooper Works, and stands as another unheralded victory for British engineering.

Red Arch is just one of thousands of UK manufacturers busy supplying vital and unique automotive parts to giants like BMW around the world. In fact, the UK is home to more than 2,000 component manufacturers that support 78,000 jobs and contribute a massive £4.3billion to the economy every year. So while big British car makers like Jaguar Land Rover get all the glory for bringing homegrown engineering and design back into the limelight, this web of suppliers has been busy innovating the industry for years. 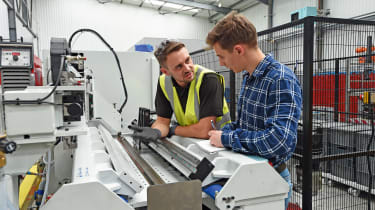 Auto Express joined Red Arch – which recently won the Queen’s Award for enterprise in international trade – for the day to see first hand what the expertise of British engineers and suppliers brings to the table globally.

The first impressions are certainly modest. Red Arch’s production and assembly plant is located on a quiet industrial site in Daventry, Northants, just a mile from its design and concept centre. It’s very different to industrial complexes like Ellesmere Port in Cheshire, but you quickly learn not to judge a book by its cover.

For 20 years, Red Arch has been engineering solutions for the likes of BMW, MINI, Aston Martin and Overfinch, to name a few. It was the company behind the original John Cooper Works kit for the Mk1 BMW-developed MINI, creating the system from the ground up, and being responsible for design, development, testing and homologation. Despite such an impressive resumé, Red Arch director Mike Theaker insists to us “that most people won’t even have heard of us”. That’s because the company doesn’t sell to the public, but supplies fully integrated and warranted systems directly to manufacturers.

So why do makers opt for suppliers like Red Arch, instead of building parts themselves? “There can be several reasons,” explains Theaker. “For one, we offer flexibility and niche expertise, which the manufacturers may not always have.”

The Bluetooth sports exhaust is a perfect example of this: Red Arch was previously experimenting with pneumatic valve technology for exhausts, but the introduction of electronic valves around five years ago opened up new possibilities. Recent developments in Bluetooth tech allowed it to develop an exhaust system that opens the valves at the push of a button in the cabin.

The system is now the subject of a joint Red Arch/BMW patent and can be found as an aftermarket option for a number of cars including the JCW MINI or the BMW M2. 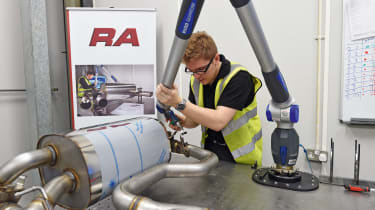 Pushing technological boundaries is just part of the benefit; there’s also the supply of spare parts. With production lines churning out the latest models, manufacturers don’t have the resources to continue producing spare parts for old models. Instead, this is done by companies like Red Arch. Theaker explains the process: “It can take up to two years for us to develop a new concept, then we produce the part for, say, seven years to the manufacturer, and finally we continue to supply spare parts directly for 15 years.”

Suppliers like Red Arch are also flexible enough to keep up with the ever-changing industry. “The entire plant [layout and output] can change in the course of two to three years,” says Theaker. The company currently manufactures up to 10,000 exhausts a year, on top of 70,000 exhaust trims and other parts like tuning kits, but could see itself move towards producing artificial ‘exhausts’ for electric cars in the future.

And although what cars in the future will sound like is still up for debate, the demand for accessories and aftermarket parts is unlikely to disappear – the market has been growing 25 per cent every year thanks to a surge in consumer demand. 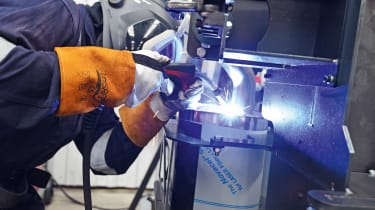 Despite the current crest of a wave the thriving industry finds itself on, it wasn’t always that way. In 2009, the global automotive industry took a battering from the financial crisis. UK monthly car sales were down by 30 per cent compared with the previous year, with the supply chain bearing the brunt of the storm. According to the UK Automotive Council, over the course of the following two years, 25,000 jobs were lost in the supply chain sector as businesses closed and downsized.

The industry has since shown signs of recovery and growth, with 2015 breaking the all-time record for UK vehicle registrations, and global car sales also on the rise. A recent survey by the Society of Motor Manufacturers and Traders (SMMT) found UK supply chain companies are looking to invest £225million into their businesses in the next three years, with the majority scaling up production capacity or taking on more employees.

The UK’s supply chain manufacturers have grown into experts in everything from drivetrains to exhausts, and the SMMT estimates British manufacturers have the capability to produce 80 per cent of an average car’s components. Even more encouragingly, the UK Automotive Council predicts there is up to £4billion more potential in the UK supply industry.

There are, however, two looming obstacles the sector will have to navigate before this potential is fully realised. The skills shortage in the automotive sector is well documented, with 41 per cent of supply chain companies confirming the lack of future talent could impede their growth in the future. Currently, not enough talented men and women are joining the sector and Theaker also tells us: “The biggest problem that the supply chain faces, especially in the Midlands area, is the draw of the major manufacturers, particularly JLR. 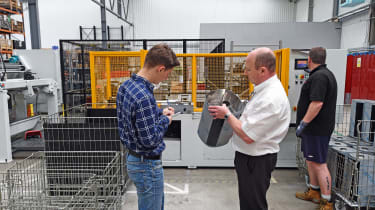 “They are also growing and attracting the top young engineers with top salaries. It’s difficult to compete on this level.” Other problems are coming from the uncertainty of Brexit, which has cast a shadow of doubt over the future of the entire industry. Mike Hawes, chief executive of the SMMT, adds: “A strong domestic supply chain is the backbone of a successful automotive industry.

“Government must help, however, securing the most competitive trading conditions in the forthcoming Brexit negotiations and keeping this sector at the heart of its industrial strategy.”

For suppliers like Red Arch, which exports 95 per cent of its output, the outcomes of an unfavourable trade agreement imposed on UK exports could be devastating. For now, though, the company and the sector is focused on what it does best: innovative British engineering.

The UK is home to thousands of suppliers that produce any number of components, from vital engine parts to decorative interior features. They offer an extremely wide range of expertise, as our look at five of the major players here illustrates.

The Worcestershire-based supplier employs 25,500 people worldwide and is responsible for some of the most innovative driveline systems. Its resume includes the sophisticated all-wheel-drive system on the new Ford Focus RS, as well as the clever eAxles on the Porsche 918.

From its factory in Bridgnorth, Shopshire, Grainger & Worrall produces some of the best engine blocks in the world. It supplies motorsport giants and high-performance manufacturers like Porsche.

This supplier, based in Reading, Berkshire works with the likes of Ford, Jaguar Land Rover and Daimler to produce components like thermal management systems and hydraulic steering mechanisms.

Set up in 2007 by its Japanese parent company, Nifco Inc, Nifco UK supplies fixtures for the likes of Nissan from its plant in Durham. It recently won a £50million contract to supply the next-generation Ford range with complex thermostatic control assemblies to cut down on emissions.

It’s not just mechanical expertise for which the UK supply sector is known. Cab Automotive, located in Tipton, is an expert in automotive interiors, producing seating materials for manufacturers like Renault.