Look out! Electric car for kids puts five-year-olds in the driving seat 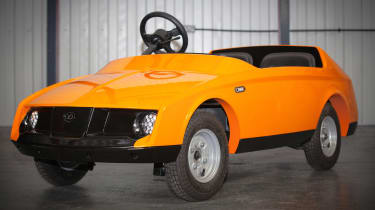 A simple online search will reveal pages and pages of ride-on electric cars for young children but the Firefly, created by Young Driver Motor Cars, is claimed to be a big step up from these. Featuring an electric powertrain, proper suspension and disc brakes, it’s engineered just like a real car – but in miniature.

First unveiled in April at the Gadget Show Live, the Firefly has been further developed on the back of over 1,000 youngsters' feedback. Its makers say it's built to the same exacting standards as any other passenger car, and the sharp bodywork has been designed by Chris Johnson, a designer with over 30 years experience working for various manufacturers of full-size cars. 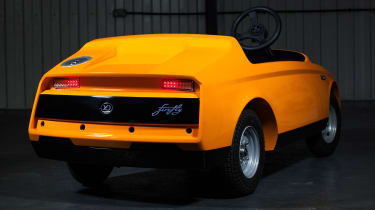 The Firefly is powered by a pair of electric motors which give a top speed of just 10mph – though in ‘Junior’ mode, it’s limited to 5mph. Junior mode also activates a sophisticated sensor system, which will operate an autonomous braking system – clever stuff for such a tiny car. It can also be controlled remotely by parents or instructors. In many ways, then, it’s just like a BMW 7 Series.

Like the 7 Series, the Firefly also benefits from LED headlights and taillights, independent suspension, and leather seats, as well as a digital instrument panel. It’s a strict two-seater, though, with a fixed passenger seat and an adjustable driver’s seat that the manufacturer claims will accommodate adults up to six feet tall.

• The easiest places to pass your driving test

Originally the car was designed specifically for use by Young Driver Motor Cars, but the company is now pursuing CE certification to allow it to be sold to the public from 2017.  With bespoke paint finishes and individual badging on the cards, it could be the next must-have toy. 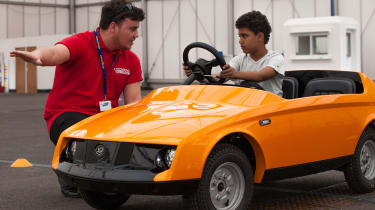 With an expected price tag of over £6,000 when VAT is factored in, it won’t come cheap, but Young Driver can offer driving lessons for five to ten year olds at selected venues at £19.95 for 20 minutes.

Kim Stanton of Young Driver, said: “We are delighted to be officially launching Young Driver Motor Car’s first electric car aimed at five to 10 year olds - Firefly. Firefly is something very special, it’s a real car in its own right, designed, engineered and manufactured in the Midlands, Great Britain – home of the car industry. We know that youngsters will enjoy driving it and that through this they will learn about road safety, finding out about the basics of driving and gaining a better understanding of how it feels to be behind the wheel.”

Would you let your kids drive the Firefly? Let us know in the comments below...