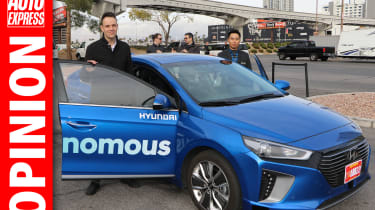 As a snapshot of how the car industry is changing at an extraordinary rate, the first two major shows of the year provide a real marker. Last week I attended the 2017 Consumer Electronics Show in Las Vegas; this week Auto Express has been in Detroit for the North American International Auto Show.

The names explain the key difference; it’s all about the car in Motor City, while the Sin City event concentrates on the tech under the bodywork.

A decade ago, CES meant nothing to car makers. I was gobsmacked to learn that Hyundai was the first manufacturer to attend, as recently as 2009. This year big names such as Mercedes, VW, Honda and Ford were out in force; some even suggested they think it’s now far more important for their business to be seen in Vegas rather than in Michigan.

• "We have much to look forward to from our homegrown carmakers"

That’s not to say Detroit has lost all its lustre. The cars in this week’s issue prove otherwise. But what is clear is that the tech at CES is becoming ever more critical for consumers and makers alike.

There were some fascinating developments on display in Vegas; I personally experienced facial recognition, augmented reality in cabins and gaze control, where simply looking at a particular part of the dashboard controls it. But the one phrase you couldn’t escape was autonomous driving, which I tried out in a Hyundai Ioniq.

Whether you fancy it or not, it is being pursued with vigour – the most extreme example at CES of how technology is altering our landscape beyond all recognition. Within this revolution, inspiring and a bit daunting at the same time, the most heartening thing I heard at CES was Toyota’s US senior VP Bob Carter imploring that the industry must never forget that it builds cars, first and foremost, for people. Amid the shifting sands of the car business, that is one mantra everyone would do well to remember.

What are your thoughts on the future of the car industry? Leave us a comment below...