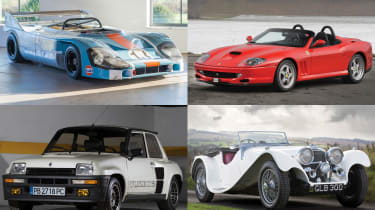 The latest auction from RM Sotheby's has been and gone, with 78 cars up for grabs at yesterday’s event at the Retromobile show in Paris. The classic car show has taken place every year since 1976 at the Paris expo Port de Versailles exhibition centre, the same venue that hosts the Paris Motor Show every other year.

This latest sale of exotic supercars and super-rare classics included swathes of Ferraris, a few exotic track cars and a huge collection of Porsches with one owner and no reserve. The lot list consisted mostly of performance cars, but was lightly peppered with small classic economy cars like a Volkswagen Beetle from 1952 and a unique, aircraft-inspired microcar. Before the auction we selected some of the most notable vehicles from the list: this is how they got on...

What are you waiting for? Scroll down to see some of the priciest and most interesting cars that went under the hammer at the 2017 Paris auction from RM Sotheby's... 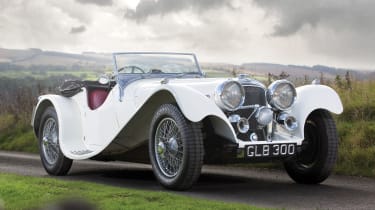 This glamorous and pristine Jag two-seater convertible was built during the Second World War and features a "2 1/2 litre" (2.6-litre) straight six engine pumping out 102bhp. 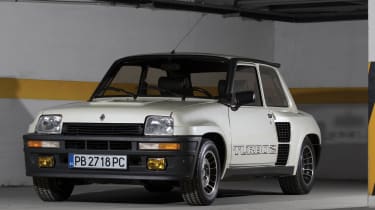 This Renault was a hot hatch hero of the eighties and managed to make the standard Renault 5 look more macho than many thought possible. Rear-wheel drive, a light chassis and 160bhp from a turbocharged 1.4-litre engine also made it a hoot to drive.

This example is a Turbo 2 model, which isn't quite as bespoke as the original 5 Turbo; the Turbo 2 had to make do with more stock Renault 5 parts and steel in place of lightweight aluminium as a cost-saving measure. However, the white and black two tone colour scheme works well and it's done less than 10,000 miles in its life.

One of many Ferraris at the auction, this F430 GTC has a screaming 450bhp V8, a six-speed sequential gearbox and previously had one owner from new. Make that two owners now.

The track-bred Italian stallion doesn't just have Ferrari's legendary pedigree behind it, but this very car also won the 2008 24 Hours of Spa in the GT2 class with the BMS Scuderia Italia team. After its race win, the car was refurbished and put into a personal collection. Easily cleared the top end of its €400,000 (£340,250) estimate. 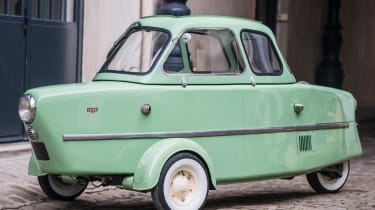 This funky contraption is inspired by the world of flight. It's powered by a single-cylinder, two-stroke engine and is one of just 30 surviving examples of around 300 made.

Believed to have rivalled the Messerschmitt K-175 back in the day, the Inter 175A has an open-top clamshell opening and two tandem seats. It's a rare beast indeed, and will make an excellent addition to the line-up of the eccentric car collector who stumped up the winning bid. 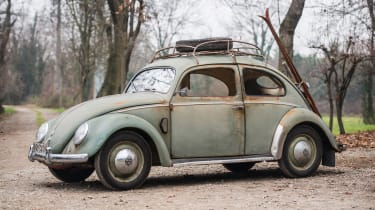 It may be rusty and slightly forlorn but this Type 1 VW Beetle has been around for 65 years. It's one of the last split rear screen examples ever made, and was dispatched to Scania Vabis in Sweden when it was first built.

The car was stored for more than 50 years between 1963 and 2014, and has managed around 48,000 miles over the course of its life. You can also tell it's been specced to handle the harsh Swedish winters, as there is even a pair of wooden skis attached. No doubt this addition helped it scrape beyond the lower end of its €55,000 (£46,750) estimate. 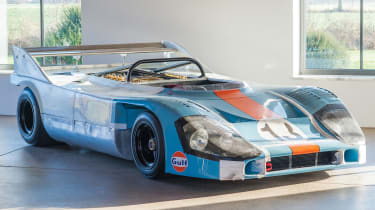 This Porsche model and cars of its ilk are legendary on the motorsport scene. The 917 in its many forms competed in several different disciplines, and this was the first 917 Can Am Spyder ever built. 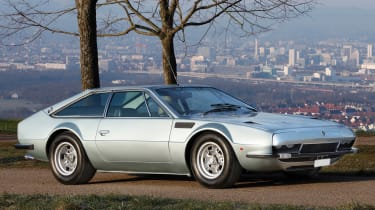 The Lamborghini Jarama is one of the rarest cars in the company's history, and arguably the least recognised, too. It's essentially a redesigned Lamborghini Islero that was built to comply with US emissions and safety regulations. 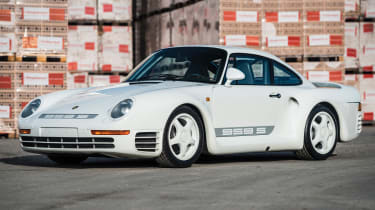 This 959 Sport comes in a rare white and grey colour combo, and just 29 were made in this spec. The Sport model was 220kg lighter than the 959 Komfort, as it did without air-conditioning and a stereo. No wonder it proved to be one of the auction’s biggest sales. 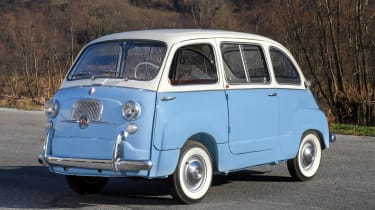 Fiat revolutionised the small car when it revealed the original 500, which took Europe by storm. However, since the 500 was a bit on the small side, it wasn't much use for larger families or commercial purposes. The original Fiat 600 pre-dated the 500 by around two years, but the Multipla model only came about half way through the 500's original production run.

Complete with a very sixties two-colour paint job, this 600 Multipla has been completely restored to its former glory. It's a six-seater people carrier model, with a 633cc four-cylinder engine capable of producing an eye-watering 22bhp. Worth every penny. Or in this case, cent. 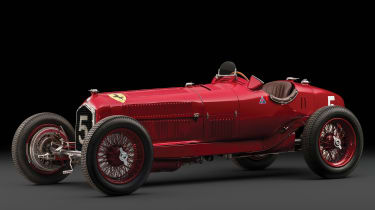 Alfa Romeo's Tipo B was a Grand Prix car with a difference. The stately racer was as light as a feather, tipping the scales at just 701kg (around 500kg less than a Suzuki Celerio) and was the first car to feature a monoposto coachwork configuration. 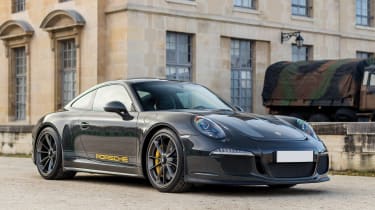 One of the newest cars in the lot list, this Porsche 911 R is a classic case of speculation in the car world. Of course, the 911 R has been hailed as "absolute perfection" by us, with other test drivers using similarly glowing words, but it's a shame that cars like these are sold at vastly inflated prices so early in their lifespan and not driven.

This achingly cool car comes is finished in a great black and grey colour scheme, and uses a 4.0-litre flat-six engine producing 493bhp. It's capable of hitting 62mph in 3.8 seconds and topping out at 200mph. Unlike some 911 R models that come stripped out, this one has a number of plush options. Hence why it sold for more than half a million Euros. 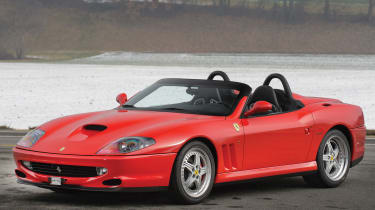 In classic Ferrari fashion, the success of the Ferrari 500 Maranello warranted a limited-run special edition and this was it. Just 448 550 Barchetta models were ever made and they were built to celebrate 70 years of Pininfarina. It was a proper roadster, too; Ferrari did provide a soft-top roof, but it was only intended for occasional use and owners were instructed not to drive over 70mph with the roof attached.

The car you see here is finished in classic Ferrari Rosso and is considered "showroom fresh" with just 244 miles on the clock.

Think these cars are cool? Check out the cars sold at the 2017 Bonhams Scottsdale auction...