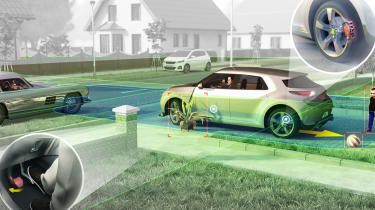 The next-generation of car safety equipment will bring 360-degree autonomous emergency braking and the complete elimination of vehicle blindspots. One of the largest suppliers of advanced driver assistance systems, Valeo, gave a glimpse into the future of safety tech at CES 2017 with its 360AEB Nearshield and XtraVue leading the way.

The 360AEB Nearshield provides a whole view around the car from four cameras and ultrasonic sensors on the front and rear bumpers. Detectors alert the driver to potential obstacles with warning tones and if ignored can bring the car to an automatic stop. The system can detect both stationary and moving objects and eliminates blind spots - especially on larger vehicles like SUVs.

Blind spots while on the move are also removed by XtraVue, which uses a smart antenna, laser scanner and in-car screen to show drivers what is happening on road outside of their line of sight by streaming video from other connected vehicles and roadside infrastructure.

Using public 4G and vehicle-to-vehicle networks, the tech merges data to create an enhanced view of the road ahead, essentially allowing drivers to “see through” obstacles. A key use would be to see around big lorries for overtaking.

Valeo also revealed its eCruise4U system that allows small, low speed manoeuvres to be carried out just using an electric motor and C-Stream, a dome module that replaces the central rearview mirror with a camera at the rear of the car. C-Stream also maps out a vehicle’s cabin and determines the number of people travelling in the car to increase safety and comfort - for example, adjusting the front airbag to suit the passenger.

All this tech is a little way off with Valeo planning for the next decade and it’s expected tech similar to this would cost around $5,000 (£4,000) extra per vehicle.