Grey speed cameras to be gone by October 2016 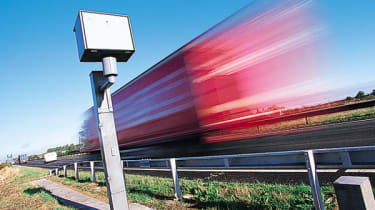 Speed cameras populating UK’s motorways and major roads will all be painted yellow by October 2016, under a new agreement with the Government and Highways England.

The move follows a minister-ordered review of speed camera policy on motorways earlier this year, which concluded that it is unfair to penalise drivers caught by cameras that are less visible than others. Hard-to-see speed cameras are also known to cause drivers to panic brake, creating uneccesary risk in traffic. Grey-coloured digital cameras were first introduced on the M42 in 2006.

• Shock as over half of motorists fail roadside drugs test

To minimise congestion, the majority of painting will be done during standard renewal processes and planned road works. There are around 200 speed camera sites on England’s motorways alone, some which contain multiple cameras.

However, local councils will not have to follow the Government’s suit, but rather, have been advised that fixed speed cameras in both lit and unlit roads should be painted yellow, or with retro-reflective sheeting. While councils will not have to paint their cameras by law, they, and local police forces, will have to publish information on the impact of speed cameras on a regular basis.

• Driving in rain and snow could affect your car insurance costs

Transport Secretary Patrick McLoughlin said: “We are on the side of honest motorists. I’ve always been clear that cameras should be visible and get used for safety rather than revenue raising. This move is about applying common sense to our roads. Speed cameras should make journeys safer rather than lead to dangerous braking. I’m delighted Highways England have agreed to meet our timetable to achieve this.”

What do you think of the scheme to remove grey speed cameras by 2016? Let us know below...