Italdesign is back at Geneva with the new Zerouno Duerta roadster, designed to commemorate the marque's 50-year anniversary 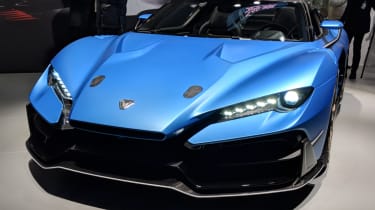 Italdesign has released images of its headline act at this year’s Geneva Motor Show – a Zerouno Duerta convertible, with full technical details to be confirmed at the show.

The roadster will launch under the Italdesign Automobili Speciali brand, and like the Zerouno coupe, it’ll likely be limited to around five units, with a price tag in excess of £1m expected.

Based around the same underpinnings used by the Lamborghini Huracan and Audi R8, a 5.2-litre V10 engine sends power to the rear wheels. Our images only show the roadster with its roof stowed so it’s unclear if the Italian firm has opted for a folding fabric or metal roof arrangement. 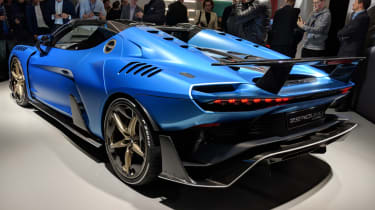 Other differences over the coupe are the pair of flying buttresses, which nestle each side of the engine cover. The same aggressive rear diffuser, fixed rear wing and quad-exhaust set up are carried over from the coupe.

Italdesign claims that the Zerouno coupe is capable of 0-62mph in 3.2 seconds, with a top speed of 205mph. Thanks to a lightweight carbon-fibre construction, those figures shouldn’t deviate too much for the convertible.

Italdesign will use the reveal of the Zerouno Duerta roadster as means for a celebration – the Italian firm marks its 50th anniversary in 2018, and the celebratory programme for the year is due to officially begin at the Geneva show.

Read all about what's heading to the 2018 Geneva Motor Show here...