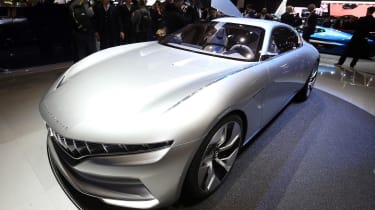 Legendary Italian design house Pininfarina has revealed its latest concept car: the 2018 HK GT. Conceived with the help of Hong Kong-based Hybrid Kinetic Group, it’s a four-seat GT car with a range-extending microturbine powertrain. It’ll do 0-62mph in 2.9 seconds, and over 60 miles on electric power alone.

The 2018 HK GT follows three previous concept cars, all revealed within the past 12 months. The H600 was unveiled at the Geneva show last year, while the K550 and K750 SUVs were uncovered in Shanghai in April. The 2018 HK GT is a sleeker GT-style car, with gullwing doors and a 2+2 seating layout.

At the front there’s a new interpretation of the HK grille, with vertical slats that reach all the way to a set of slim LED lights. The side profile is more coupe than saloon, while the rear appears to take inspiration from cars like the latest Mercedes AMG GT. The HK GT gets a set of sharp tail-lights and a small boot spoiler, as well as subtle vents designed to direct airflow as smoothly as possible. 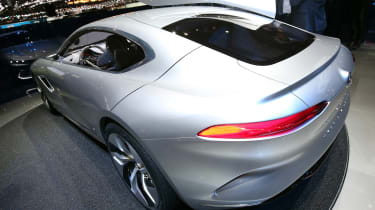 Under the skin this Pininfarina concept is equipped with a 20kWh HK ‘super battery’ as well as four integrated motors with two-speed transmissions. It’s the range-extender set-up that differentiates it from its competitors, however. Using a microturbine system, the HK GT can be adapted to run on a broad range of fuels including conventional and renewable solutions, as well as hydrogen. This will allow the car to travel over 1,000km (620 miles) between charging and refuelling.

Inside, there’s a ‘floating’ dashboard design with a fully digital instrument display, buttonless centre console and supplementary folding screen on the passenger side. Each seat is neatly cocooned by the high transmission tunnel, while the sweeping dash continues from the base of the windscreen to the back of the doors. 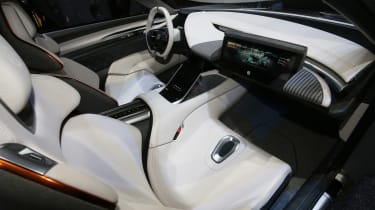 Pininfarina says the car has two driving modes: Race and Gran Turismo. The first is for “moments of solitary and hedonistic sports driving” while the latter is for “great routes to be shared with the family”. In the Race setting, the cabin is bathed in red, with the dials showing only essential driving data. The cruise setting offers a more gentle blue hue, with more information and a more inclusive driving experience.

While only an idea for now, there’s a chance Pininfarina will forge ahead with plans to push at least one of its concepts to market. Given the current global penchant for SUVs, the first model is likely to draw much from the K550 and K750 studies revealed in 2017.