Pininfarina designed range-extender uses a turbine and electric motors for over 600 miles of range and 0-62mph in 2.9 seconds 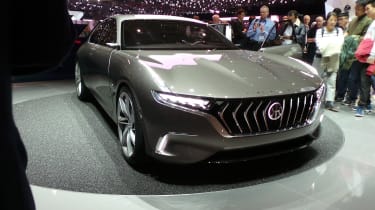 Called the H600, it uses a unique all-wheel-drive range-extended hybrid powertrain utilising a micro turbine engine to recharge the batteries. In total, the two electric motors produce over 800bhp, and the two companies claim the H600 can do 0-62mph in 2.9 seconds and has a top speed of 155mph. When the range-extending turbine engine kicks in, the H600 boasts a claimed range of over 620 miles. 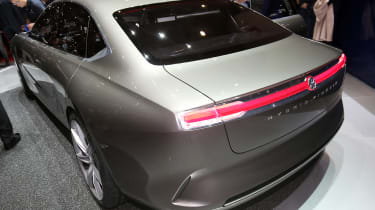 Compared to other concept cars on the stands at Geneva this year, the H600 cuts a rather cool, understated look on the ouside. The angled large front grille with vertical slats and thin headlights hints at more recent Maseratis. The bodywork is particularly free of aggressive angles, folds and gills, and the sides feature smooth flares over the rear wheels. The back end of the car is conventional and square, with a long, singular LED taillight running the length of the rear.

It takes the form of some of the more rakish, coupe styled saloons you’ll find on sale in showrooms right now, though the H600 lacks a solid B-pillar – the back doors are hinged at the rear, so the entire cabin can be opened up wide. 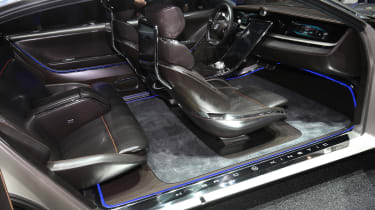 It’s inside where the H600 really flexes its concept car muscles. The cabin is upholstered with cocoa brown leather, while the seat backs are trimmed in dark wood. Colourful ambient lighting strips loop around the cabin. Up front, the driver gets a digital dashboard, and the centre console is home to a large portrait infotainment setup.

What do ou think of the H600? Let us know in the comments below.