We dive deep into Geneva’s stands to explore some of the quirky and often overlooked and exhibits... 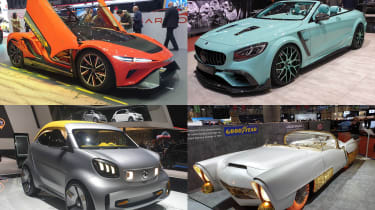 The 2019 Geneva Motor Show launched some significant new production cars and concepts but anyone who stepped slightly off the beaten track in Geneva would have found a wealth of weird and wonderful cars that might have slipped under the radar otherwise.

While the mainstream manufacturers wheeled out their latest volume selling hits, many lesser known brands trotted out their creations in the hope of generating interest and even some cash deposits. It’s those automotive oddballs we’re concerned with here as we pick out 10 cars you might have missed at the 2019 Geneva show... 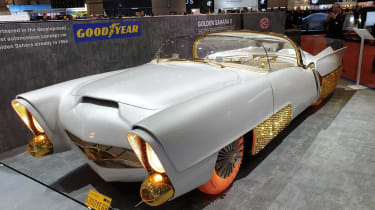 Motor shows are not reserved just for car manufacturers as Goodyear demonstrated when it surprised everyone with the Golden Sahara II, a glimpse into the future of motoring from the 1950’s.

The Golden Sahara II is actually a show car that was never fully completed and has now been carefully restored. Goodyear’s main involvement with the concept was proving those space-age translucent tires made out of synthetic rubber. Spookily, this car featured surprisingly accurate predictions of future car tech with early examples of voice control, sensor-based braking and remote engine start all featuring. 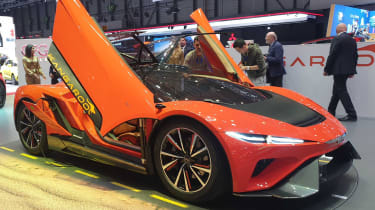 Italian design house GFG Style (founded by Giorgetto Giugiaro) showed up with its new electric ‘hyper-SUV’, the Kangaroo. Despite the silly name, that Renault may well have something to say about, the Kangaroo boasts pretty impressive numbers. A range of over 280 miles on a single charge plus a 0-62mph sprint in just 3.8 seconds courtesy of two 180kW electric motors sounds impressive.

Encasing all that electric tech sits a beautiful carbon fibre body with typical concept car touches such as LED crystal tail lights and some rather extravagant scissor/gullwing doors. 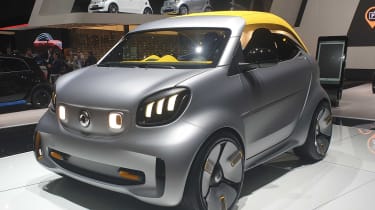 First seen at last year’s Paris Motor Show, the Smart Forease concept emerged once more to fill the Smart stand. For Geneva however, the concept had been fitted with a reinforced fabric roof to create the Forease+.

Elsewhere the concept remains pretty much the same with a pair of roll hoops, complete with integrated ducktail spoiler, behind the seats and a hot-rod style windscreen. 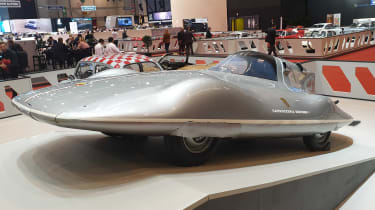 Away from the main Abarth stand was this pair of vintage Abarth cars. The Abarth Record and the Abarth ‘500 record’ are two streamlined Abarths designed to break records. The first one created by Bertone and built in 1956 managed to break ten world records at the high-speed track at Monza using just a four-cylinder 743cc engine derived from the Fiat 600.

Pininfarina designed the second Abarth in 1958 and proved to be even more successful, breaking a total of 23 international speed records using a similar streamlined body to the original. 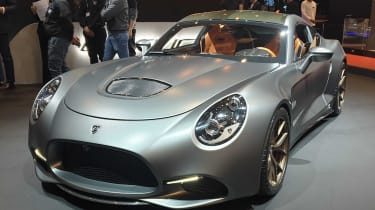 To keep weight down, it uses a carbon fibre tub construction while more carbon fibre is used in the body panels and cabin. Only 150 models will be built and you can expect to pay a seven-figure price for the privilege of all that power. 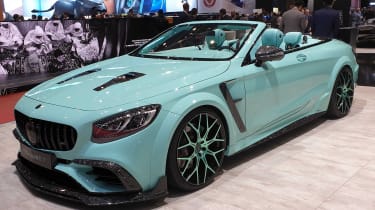 Inevitably a Mansory creation would appear in this list at some stage, the tuning firm has become famous for its weird, wacky and often somewhat tasteless creations for the Geneva show.

This one is the Mansory S-Class Convertible and it was almost impossible to miss on the Mansory stand thanks to its retina burning aqua blue paint job. Better still, if you really are a fan of the colour then you’ll be glad to know it’s used for the all leather interior and the alloy wheels as well. 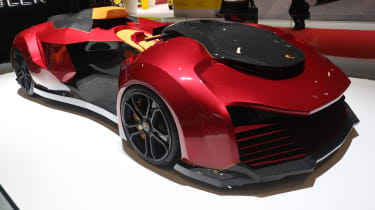 Quad bikes are notorious for their dangerous nature so you would think if anyone modified one they would try to make it a little safer? Wrong.

Meet the Engler F.F. Superquad, a quad bike fitted with a huge 5.2-litre V10, producing 850bhp and topping out at 217mph and hitting 62mph in only 2.5 seconds. It might be wise to check your life insurance and book a team of paramedics before attempting a ride. 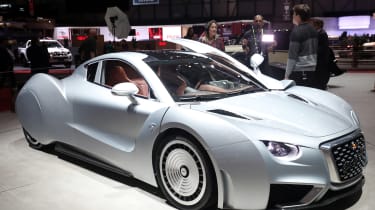 You may have seen an Hispano Suiza badged car elsewhere at Geneva but this is the other one Hispano Suiza. If you’re confused you’re not alone but basically there are currently two seperate companies in dispute over the Hispano name and both turned up at the show claiming that their car is the genuine article.

The Hispano Suiza Maguari HS1 GTC was revealed before Geneva but this is the other one.  The Carmen is a 1,005bhp all-electric supercar with an interesting choice of design. Its covered rear wheels, slicing front wings and odd placement of the company name on the grille divided opinion at the show. Almost as much as its name has done. 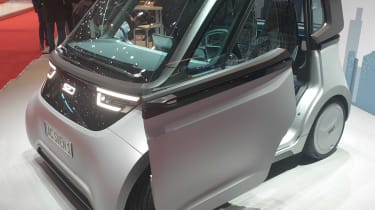 Built for the future of car sharing, the Sven (Shared Vehicle Electric Native) is a small electric vehicle designed for the sprawling cities of the future. Aimed to be used by all types of drivers, the controls have been minimised and can be operated via touch or voice activation.

Large windows give an almost 360 degree view around the car while a sliding driver’s door allows the Sven to be parked in the tightest of spaces. Inside there is a two-plus-one seating layout while all surfaces are easy to clean so that the next driver won’t be faced with any unwelcome stains or smells 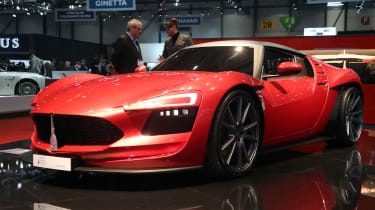 The Mole Costruzione Artigianale Almas is a new supercar from Italy and is certainly a contender for the longest car name in show award. The body and chassis is built in house out of carbon fibre in a quest for lightness while the Maserati-esque grille and narrow LEDs give the front an aggressive face.

For all the latest Geneva Motor Show news, visit our dedicated homepage...