The 2019 Geneva Motor Show was packed full of new metal, but the Auto Express team have picked out the best cars on show 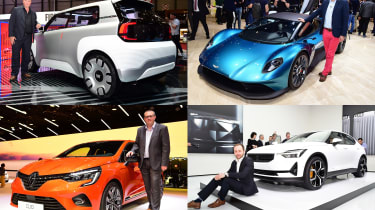 The 2019 Geneva Motor Show has been one to remember. The sheer variety of new cars on display is enough to bring a smile to any enthusiast’s face. Whether you prefer the roar of a V8 or the surge of an EV, there really was something for everyone at Palexpo this year.

As expected, plenty of new hybrids and EVs were on display, with the growing trend towards electrification evident across the board. The VW Group previewed various electric concepts including the retro ID. Buggy and the more conventional SEAT el-Born, while Aston Martin debuted the opulent Lagonda All-Terrain SUV.

• Everything from the 2019 Geneva Motor Show

Speaking of SUVs, Mazda revealed its stylish new CX-30 crossover amongst various others from Skoda, Cupra, Mercedes and Audi. Stealing the SUV limelight though was a surprise from Alfa Romeo, the elegantly-styled Tonale.

Even more surprising though, are all the new city cars and superminis on display, proving there’s still a market for cheap, small transportation.

The new Renault Clio and Peugeot 208 made their debuts, while Fiat previewed an electric concept likely to be the base for the next Panda. Honda, meanwhile, gave us our first proper look at the e Prototype, a premium electric city car that’s almost ready for production.

Naturally, the vast array of supercars on display were a delight to see, but what cars actually caught our eyes? Here, the Auto Express team pick their favourite cars of the 2019 Geneva Motor Show. 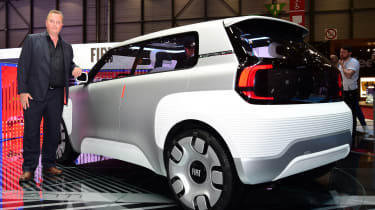 In what I think was the best Geneva Motor Show in years, one car really stood out for me – Fiat’s little Centoventi electric car. This is Fiat back to its innovative, small car best producing a small B-segment car that instantly answers calls for an electric model, but with personalisation to the fore. Buyers can 3D print accessories like cup or smartphone holders at home – genius.

But in spite of the Centoventi’s chunky looks and a soft toy Panda sitting inside the show car, this might not be the Panda replacement everyone seems to think it is – it could yet become a new model in its own right.

It was a terrific show, with some of the best concepts I’ve seen in a long time - but my star car was very real and very affordable. Renault’s Mk5 Clio looks like an evolution from the outside, but it sits on an all-new platform, will have mild-hybrid technology and most of all, delivers a real step up in cabin quality for the supermini class.

Who’d have thought that a small Renault would have more premium materials inside than the latest VW Polo or even the new Audi A1? But that looks set to be the case. It looks like being one of Renault’s most complete offerings for a generation. 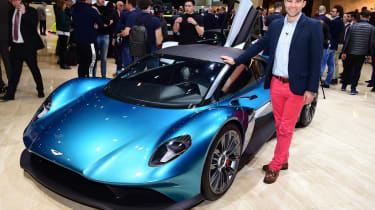 Of all the manufacturer stands at Geneva the Aston Martin stand was the one to be on. There was a tangible sense of excitement at Aston and it was for three very good reasons. The 003 and the Vanquish Vision concepts were each vying for star of the show and meanwhile the Lagonda All-Terrain Concept looked down on both showcasing an all-electric future.

The two Astons, though, were exciting because they showed off an Aston Martin brand that is brimming with complete confidence. The Vanquish was my star of the show as it not only looked stunning, but also with its mid-mounted brand new V6 engine would give Aston the biggest chance of toppling rivals McLaren and Ferrari.

But, despite the buzz in the atmosphere and the glamour of the metal, there was one thing no one was talking about. The DBX SUV strangely wasn’t there and you couldn’t help but feel that these mid-engined monsters on the show stand are a tantilising glimpse of the future; they’re not the present. The present is all about the DBX and if Aston sells the SUV in large enough numbers, the 003 and Vanquish’s future could be made real. 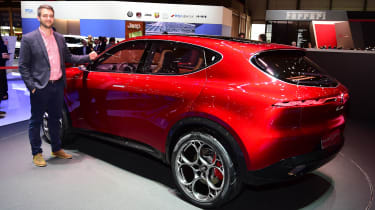 Far from feeling empty or undersubscribed, this year’s Geneva Motor Show was full of star cars. For me, one shone brighter than the rest, however; the stunning Alfa Romeo Tonale. While it’s just a concept for now, it previews a gorgeous production SUV due late next year.

There are hints of Alfa SZ at the front, while its striking lines lend it a more considered shape than the larger Stelvio. Better still, it previews a line-up that will comprise not two, but four SUVs by the middle of the next decade. Alfa is on a roll, and I can’t wait to see what’s next. 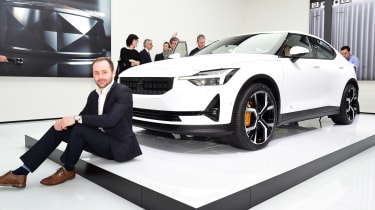 While almost every mainstream brand is making bold claims about a fleet of future electric vehicles, Polestar, the fresh-faced Swedish firm, has emerged from nowhere and beaten them all to it.

The Polestar 2 may be a Volvo at heart but that would be to discredit the design, technology and innovation that have gone into the car. The headline stats read: 310 miles on a charge, 402bhp, and yours for under £40,000. And better still there’s an even cheaper version on the way if you’re willing to sacrifice a bit of range. 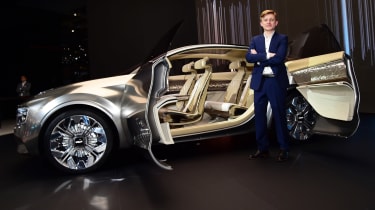 I don’t often swoon over concept cars, but the Imagine by Kia is so lavish and unapologetic that I couldn’t help but fall for its charms. Okay, I don’t quite understand the ‘new’ five-door fastback crossover market that Kia says the Imagine visualises, but nothing takes away from the fact that this is a stunning luxury and technological electric concept.

On closer inspection the finish inside and out on this show car is impeccable – no signs of the oft-common show-eve rush to screw everything together. That’s because this is a concept Kia wants you to take seriously, given plans for a production version early next decade are all but signed off. 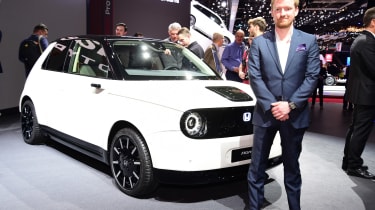 For me, this year’s Geneva star was a choice between two EVs that prove electrification needn’t come at the expense of charm. But while I loved the Volkswagen ID. Buggy’s sense of fun, the Honda e Prototype gets my pick. I was initially worried that it wouldn’t live up to the looks of the Urban EV concept, but up close it’s even prettier. It’s stunning on the inside, too.

I get to see and drive plenty of new cars at Auto Express, but the list of those that I actually want to own is very small. If the production version of the e Prototype lives up to expectations, it’d shoot right to the top of the pile. 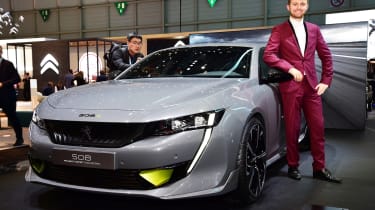 Considering the amount of incredible new cars on offer at Geneva this year, you might be surprised to see a Peugeot saloon here. However, you shouldn’t be.

Peugeot is currently on a roll with its line-up in terms of design (see the new 208 for proof) and the 508 Sport Engineered concept is no exception, it blends a stylish saloon body with subtly aggressive bodywork. Plus, as a bonus, this concept will see production in the form of a hot 508 plug-in hybrid, albeit it without the mad 400bhp figure. Could this car herald a return of the fast affordable saloon? I sure hope it does.

The Nissan IMQ is my star car for two main reasons. First, the angular design that’s wholly fresh and futuristic yet still identifiable as a Qashqai successor - particularly the rear three-quarter. Concept design works best when it’s radical but also clearly illustrates the direction the subsequent production car will take, and the IMQ does that brilliantly.

The second reason is the use of range-extender tech, which seems to have fallen out of favour with most manufacturers yet in my books makes as much sense - if not more, in many ways - than plug-in hybrid tech. It’ll be great to see if Nissan can make the IMQ’s tech and design a mainstream reality.

What was your favourite car of the 2019 Geneva Motor Show? Let us know your thought below...