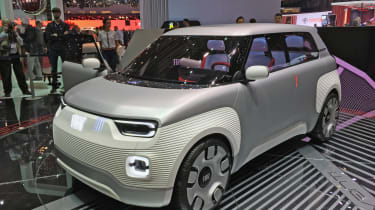 The Fiat Centoventi, revealed as a concept car at 2019’s Geneva Motor Show, is on the way to showrooms, the company’s boss has confirmed to Auto Express.

The city car study celebrated 120 years of the Fiat brand and also gave us a glimpse at a new small urban EV inspired by the Panda. Now Olivier Francois, the Fiat brand’s Global President, has told us that work is already under way on making the car a reality.

“At Geneva last year, we showed our other EV car, our urban baby, we are still working on it - it was not just a flash in the pan.” Francois told us. “It’s another approach to full electric. So I think we have a bright future in the full electric approach to city cars, through the 500e and through the more non-traditional approach with this minimalist, lower prince Centoventi that is very Panda-inspired.” 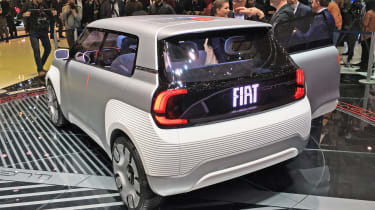 From the outside, the Centoventi has a look that's a futuristic evolution of the Panda city car. Design touches include chunky wheelarches and a boxy overall look, while the study features interchangeable plastic body and roof panels that will allow buyers to change the look of the car to suit their tastes. The nose also features a stylised multi-bar grille, inspired by the original Panda, but this is designed to show the charging status of the car's electric powertrain.

The Centoventi is almost certain to adopt the new all-electric architecture that debuted on the latest Fiat 500e. Francois added: “When you invest in a new platform, and it is a completely new EV architecture, it is not for one car, so you will see it on other cars. It will be used to make the most of the investment, and used between nameplates and brands.”

The barn-style side doors of the Centoventi concept are unlikely to make production, but they open to reveal what Fiat describes as a 'decontented' interior. This simplified space features a driver's seat, rear bench, a minimalist dashboard and a large mounting bracket where the passenger seat would normally sit. This bracket is designed to allow the fitment of different modules, whether it's a passenger seat, a storage basket, child's car seat or even a pet carrier. In addition, the Centoventi also includes the ability to change seat fabrics so owners can personalise and update their cars during their ownership. 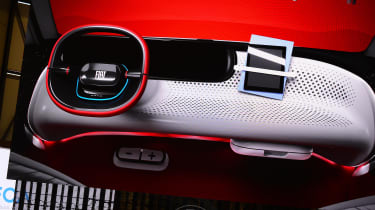 For the dashboard, Fiat has created a 'plug and play' system that allows owners to fit different kit to suit their needs. The dashtop features a system of holes that can take additional storage modules, cup holders, smartphone docks and other devices.

There's also the option to fit different-sized instrument clusters. The standard digital display appears as a pod ahead of the steering wheel, but Fiat will also offer a super-sized 20-inch display called Lingotto (named after Fiat's famous Turin factory with the test track on the roof) which fills the full width of the dashboard area. The doors have the option to fit different storage options or moulded armrests, too.

Fiat is using the Centoventi concept to promote its ambition to make electric drive available for the masses. When the concept was revealed at Geneva, it had a battery capable of delivering a modest 60-mile range. But with the ability to swap and add battery packs, Fiat claims that the range could be boosted to up to 300 miles. In addition, the concept allowed for the batteries to be added at a Fiat dealer in as little as 5 minutes, while an easy-access battery pod under the passenger space allows quick battery changes for those in a hurry.

While just a concept, the Centoventi delivers a fascinating insight into future Fiat city cars. With this model and the 500e already on the way, as well as a tie up with Apple confirmed, it will be interesting to see how many of the concept car’s  innovations eventually make production.

What are the best small electric cars on sale? Head over to our sister site DrivingElectric to find out...