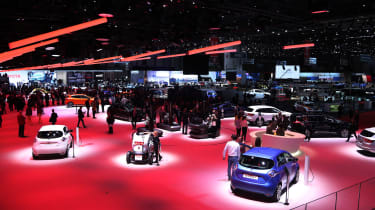 The 2020 Geneva Motor Show has been officially cancelled by show organisers, after the Swiss government announced on Friday morning that it was banning large public and private gatherings until at least mid-March to limit the new outbreak of coronavirus in Switzerland.

The announcement comes after a week of horse-trading between the Geneva show organisers and car manufacturers, and only three days before opening. Many big carmakers had been pulling out senior executives and engineers from show appearances over concerns about the virus and possible quarantine situations, and Switzerland reported fresh cases of the virus on Friday.

Swiss authorities have decided to ban public and private gatherings with more than 1,000 people until 15th March at the earliest - following a similar policy by the neighbouring German government. This relatively small number of people makes the car show impossible to stage, and a number of similar events taking place in Switzerland have also been cancelled.

Earlier rumours had suggested that the show would instead be postponed and moved to a date later in the year, but Friday morning's announcement only confirms that no 2020 iteration of the Geneva show will take place.

Dozens of new-car launches and reveals were planned for the event, which was due to open with its traditional press days on Tuesday and Wednesday next week.

"We regret this situation, but the health of all participants is our and our exhibitors' top priority. This is a case of force majeure and a tremendous loss for the manufacturers who have invested massively in their presence in Geneva. However, we are convinced that they will understand this decision," said Maurice Turrettini, Chairman of the Foundation Board.

The dismantling of the show floor will begin immediately, while organisers have spoken of the "significant" financial consequences for all those involved in planning and attending the event, of which further assesment is required.

Geneva organisers have confirmed that tickets for the show already purchased by visitors will be refunded online, with further details to be released shortly.

Click here to find out how coronavirus has affect MoTs in the UK...

The 2021 Geneva Motor Show has been cancelled due to financial hardship and poor manufacturer response
Coronavirus: what does it mean for cars and motorists?

Welcome to our Geneva Motor Show hub page, scroll down for all our Geneva content...
Vauxhall plans for re-opening of Ellesmere Port plant could be delayed