Production-spec Koenigsegg Regera hybrid blasts from zero to 250mph in a claimed 20 seconds! 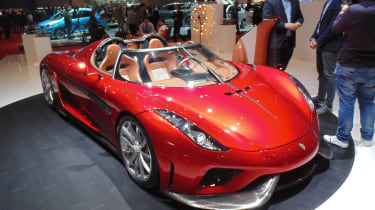 Since the mind-blowing Koenigsegg Regera first appeared at Geneva 2015 in prototype form, the Swedish ‘megacar’ maker has been keeping busy. The monstrously powerful – and monstrously quick – hybrid has reappeared at the 2016 Geneva Motor Show in final production trim.

The basic package remains the same as last year's concept, so the car is built around a version of the Koenigsegg Agera’s chassis and its 5.0-litre twin turbo V8. The powertrain also includes a 4.5kWh battery pack and a trio of electric motors.

With a combined petrol and electric power output described as in excess of 1,500bhp, the Regera trumps the new Bugatti Chiron for absolute power. But while the Chiron benefits from four-wheel-drive traction off the line, the Regera is a rear-driver only. As a result the Chiron is swifter off the mark, but the figures claimed by Koenigsegg for the Regera suggest it can blow the Bugatti into the weeds at higher speed ranges. 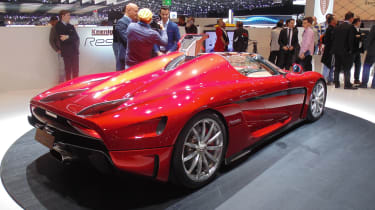 The acceleration numbers for both cars are staggering. Bugatti claims 0-62mph in 2.5 seconds, while Koenigsegg claims 2.8 seconds. The 0-124mph time is 6.5 seconds for the Chiron and 6.6 seconds for the Regera, but Koenigsegg soundly beats the Bugatti to 186mph with 10.9 seconds compared to 13.5. If ever a twin test is going viral on YouTube, this will be it…

The Swedish carmaker reckons 3,000 changes have been made to last year’s concept, although most are under the skin.  In particular, work has focused on the Koenigsegg Direct Drive System that – in simple terms – replaces the gearbox with three electric motors and a fixed final drive. It works via a locking hydraulic coupling (a bit like a torque convertor), which has a clutch-slip mechanism to allow the engine to gain revs and power. 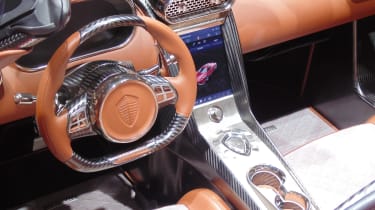 The production Regera on display at Geneva also features a package of comfort and convenience features, including an ‘Autoskin’ function that allows the driver to open all the vehicle’s closures – doors, and front and rear clamshells – via the key fob. The wing mirrors fold automatically as the scissor doors open, and there’s an optional surround-view camera system too.

With heated electric seats, and Apple CarPlay as standard equipment, Koenigsegg reckons the Regera is “a fusion of luxury, comfort and race car performance”. A maximum of 80 examples are scheduled to be built, each with a price tag of £1.2m, and first deliveries to lucky customers will be at the end of this year.