Bugatti has been putting the 1,479bhp Chiron through its paces on camera, with Juan Pablo Montoya at the wheel 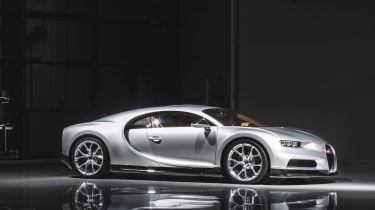 The new 1,479bhp Bugatti Chiron has set a new world record – not for outright top speed, but by achieving a 0-249mph and back to nought dash in 41.96 seconds, with former Formula 1 driver and Indy 500 winner Juan Pablo Montoya behind the wheel.

Alongside the announcement, the hypercar manufacturer has released a series of videos of the Chiron hitting various performance benchmarks. 0-62mph is dealt with in 2.4 seconds, with 124mph taking 6.1 seconds. A 0-186mph dash has been recorded at 13.1 seconds, with 0-249mph coming in at just over half a minute – 32.6 seconds.

The Chiron is currently electronically muzzled to 261mph, but it’s understood that a top speed run will take place next year with the limiter removed, as Bugatti hopes to better the 267.4mph speed record set with the flagship version of its predecessor – the Veyron Super Sport.

The £1.9 million Bugatti Chiron - successor to the all-conquering Veyron hypercar released in 2005 – has been in the making for a while now, but first customers are getting their cars now.

Limited to just 500 examples, the Chiron packs 1,479bhp and in time will attempt to smash the current top speed record for a production car, set at 268mph by the Veyron Super Sport. We’ve got all the details and the latest news on the new hypercar right here.

The latest word from Bugatti reveals that production is gathering pace at the firm’s Atelier workshop in Alsace, France. First deliveries of the Chiron are set to take place during the first quarter of 2017 and the firm plans to build 70 examples per year.

The Chiron’s is powered by a new quad-turbo 8.0-litre W16 engine – developing 1,479bhp and 1600Nm of torque. The engine may share the same format as the Veyron, but Bugatti's boss Wolfgang Dürheimer claims 95 per cent of the engine’s components are completely new. Firm details regarding a 0-62mph time are yet to be released, but it could be around as little as 2.5 seconds. 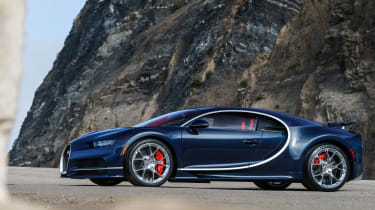 London-based luxury car dealer H.R Owen has been confirmed as the only dealership in the UK where you can order a Chiron. Of the 500 models Bugatti will produce over 200 have already been sold, with 15 of those coming from UK based customers. Dürheimer also confirmed to Auto Express that one customer has ordered six Chiron's. On average, customers spend an additional £250,000 on options when speccing their Chiron.

According to Dürheimer, the Bugatti engineering team ‘knows the Chiron is faster, but not by how much’. However, there will have been plenty of computer simulations to give the company confidence about a significant improvement on the record. Sources suggest 288mph is definitely possible, but whether Bugatti discovers a way to find another 12mph and be first to that tantalising 300mph target remains to be seen.

With all this power and perfomance, the Chiron certainly doesn't score high in the economy stakes - Bugatti has revealed its new hypercar will do 12.5mpg on a combined cycle, with 516g/km CO2.

The Bugatti Chiron roars on video

The new Chiron makes almost 300bhp more than its Veyron Super Sport predecessor. The top speed is limited to 261mph for “road use”, but the firm states this is “by no means the end of the road” for the Chiron. The speedo runs up to 500kmh (310mph).

Bugatti has made this monumental speed possible by enlarging each of the four turbos and introducing an innovative new two-stage spooling system. A titanium exhaust also features, as do six enormous catalytic converters. The manufacturer also claims the Chiron uses the highest-performance clutch ever fitted to a passenger car. Carbon silicon carbide brakes with eight pistons rein all that power in, as does the air-brake that protrudes from the rear haunches.

But this isn’t just a straight-line weapon, according to Bugatti. The carbon body is based around a new carbon-fibre monocoque chassis, which should mean it’s considerably lighter. It gets an adaptive suspension system and specially developed tyres, and is claimed to be “an agile, modern Bugatti with handling that ensures maximum driving pleasure”. 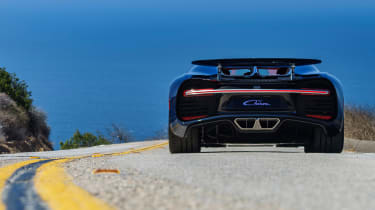 Although the car has been testing for some time now, the bold mix of curves and straight lines for the exterior is still striking. At the front it gets a sculpted bonnet and low headlights, while round the back, a unique 1.6m long LED light strip features. It’s taller and wider than the Veyron, with increased space in the cabin. Inside you’ll also find luxury features like a high-end sound system, WiFi and 31 leather trim colour options.

Only 500 examples of the Chiron will be built, and over 200 of those have already been snapped up by customers.

Speaking at the Chiron's 2016 Geneva Motor Show reveal, Bugatti CEO Wolfgang Durheimer told Auto Express: “Yes, we have nearly 170 cars allocated for serious purchasers. They have all laid down either 250,000 US dollars or 200,000 Euros.” 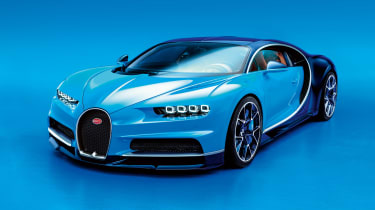 Incredibly, one potential super-wealthy buyer has paid deposits for no less than six Chirons, and Durheimer added that he was aware of some customers buying used Veyrons to give themselves a better chance of being allocated a Chiron, as the brand will look more favourably on current owners.

And given parent company Volkswagen’s current financial predicament, with massive fines and compensation bills looming in the wake of Dieselgate, Durheimer said the Group had nothing to fear from the Chiron, which is of course a hugely expensive car to develop. “This is a profitable project,” he stressed. “It produces more money that it will cost."

According to Bugatti it takes six months to produce and sign off a Chrion for customer delivery, and the lengthy process has been revealed.

After customer configuration has been submitted, Bugatti assembles the bodyshell on the on the monocoque and chassis, before transferring it all to the paint shop. It takes about three weeks to paint the panels.

The car’s enormous powertrain – weighing 628kg - is delivered from Volkswagen’s engine plant in Salzgitter after undergoing hours of checks on a test bed. Engineers at Bugatti install on the chassis it by hand.

The rear of the vehicle is built almost entirely around the huge 8.0-litre quad turbo W16 engine and the rear end is bonded to the monocoque via 14 large titanium bolts. Engineers also begin to construct the car’s front end and equip wiring looms, plus other vitals such as the vehicle’s three water pumps. 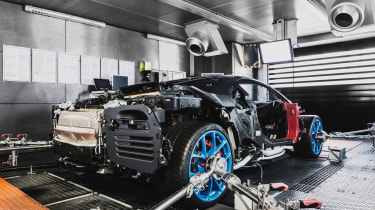 With wheels bolted on and fluids filled the car hits a modified dynamometer. During testing, the Chiron throws out up to 1,200 amps, which is fed back into the grid.

After a successful dyno test, the car’s complete body is fitted and it undergoes a leak test, after which work can begin on the interior. It takes three days for a team of two people to check over the cabin. A 300km test drive under protective film takes place before the final paint finish is applied. A two day period of cosmetic preparation and checks takes place, before final customer handover. 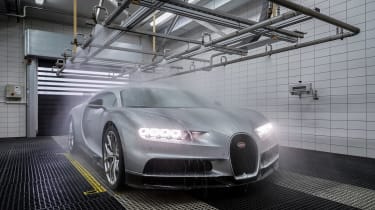 Buyers get 23 paint colour choices or seven carbon finishes to choose from, and each car requires eight coats of hand applied paint. The company also offers 31 different leather colours or eight Alcantara upholsteries, alongside 30 shades for the stitching, 18 different carpets and 11 seatbelts, though just about any colour can be had on request.

Bugatti takes the Chiron to the hottest place on earth

Bugatti has pushing its ultimate hypercar to extremes as part of a rigorous hot weather-testing programme in Death Valley and across the west of the United States.

Engineers took four Chrions to the US this summer to perform endurance tests in the sweltering heat, racking up nearly 22,000 miles behind the wheel in temperatures as high as 51.5 degrees Celsius.

The four week long excursion saw the Chirons depart from Los Angeles, travel north through California’s central valley, across to Yosemite national park, before heading down towards Death Valley – one of the hottest places on earth. Las Vegas, the Sonoran Desert and Monument Valley were all stop offs on the development trip too.

Putting a car through conditions as extreme as ones found in Death Valley is vital if Bugatti is to deliver a hypercar that’s the fastest money can buy while being a luxurious tourer.

Is the Bugatti Chiron a worthy successor to the legendary Veyron? Let us know in the comments section below...

Welcome to our Geneva Motor Show hub page, scroll down for all our Geneva content...
New track-only Bugatti Bolide arrives with 1,825bhp 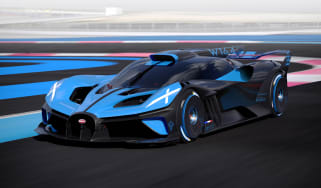 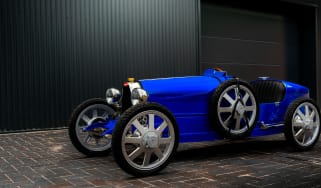