With 525bhp from its supercharged Audi V8, just 50 Spyker Preliators will be built in Coventry 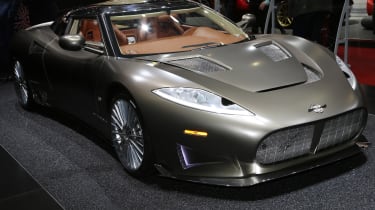 Spyker has unveiled a new 200mph, Audi V8-engined supercar as a successor to its C8 Aileron. It’s called the Spyker C8 Preliator, and limited production is slated to start in the UK at the end of this year.

The Preliator – which translates from the Latin to 'fighter' or 'warrior' – continues the Spyker tradition of aviation-inspired design. Previous models have used propeller and turbine design graphics, but the Preliator looks to the drag-reducing NACA duct to shape key design features. Most notably, the Aileron’s roof-mounted airscoop has been replaced by a duct. 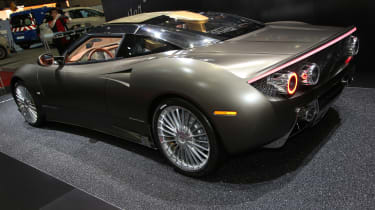 There’s a new grill form at the front, as well as various detail aerodynamic changes to the splitter and side skirts, while the Aileron’s fishy gills have been deleted. The Preliator also gets a ‘space age’ gold coating over its canopy, and the rear LED lights are shaped to mimic fighter jet afterburners.

Changes to the all-aluminium spaceframe mean the Preliator is a little longer than the Aileron, and 10 per cent stiffer. As well as releasing more interior space, Spyker reckons it makes the car more stable at speed.

Talking of which, the Preliator also features a new Lotus-designed double wishbone suspension set-up, and it rides on 19-inch Turbofan alloy wheels. 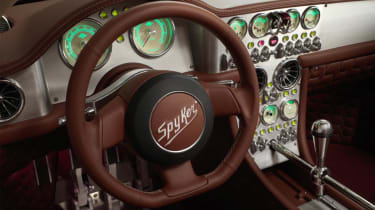 Like the C8 Aileron power comes from Audi’s 4.2–litre V8, but it’s been supercharged to provide 525bhp. A six-speed Getrag manual gearbox is standard, but an auto is on the options list. As well as a top speed of 201mph, the car’s low 1,390kg weight means acceleration is rapid with 0-62mph coming up in 3.7 seconds.

With a price tag of around £300k the Preliator would be rare even if Spyker’s Coventry-based partner CPP Metalcraft wasn’t limited to making 50 examples. That said, Spyker has a torrid recent history that included an ill-fated period as owner of Swedish brand Saab. Hopefully the Preliator marks a return to a brighter future for the brand.