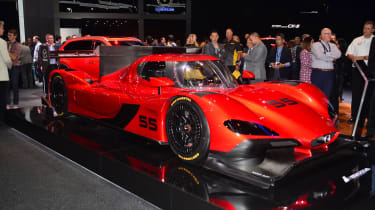 Mazda is no stranger to endurance racing, with some legendary rotary-engined cars enjoying considerable success at Le Mans and elsewhere. The latest creation from the Japanese company’s motorsport division is the RT24-P, which will debut at the 2017 Rolex 24 hour race in January. Before that, it has been on the Mazda stand at the 2016 LA Motor Show.

The RT24-P continues Mazda’s Kodo design philosophy, which is evident in the car’s sculpted lines and distinctive front air intake. Elsewhere it’s pure racer, though, with an aerodynamic silhouette and spoilers aplenty to provide downforce. The team had to consider aerodynamic performance along with new-for-2017 technical regulations when designing the car.

The car is set to race in the IMSA prototype class, the highest level of the IMSA WeatherTech SportsCar championship. This means it’s not limited by LMP2 regulations, and Mazda can provide its own bodywork and powertrain. 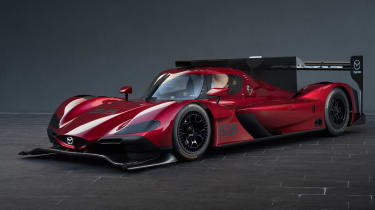 Power comes from a 2.0-litre turbocharged four-cylinder engine, which pumps out a massive 600bhp. With a power figure like that, it's not hard to realise that it'll be different from your average 2.0-litre SKYACTIV engine seen in the Mazda 3 - despite the identical displacement.

However, the small engine is said to keep the car ‘true to the Mazda brand’ – and it offers fuel economy benefits, too. Elsewhere, the car sits on a Riley Mk. 30 chassis, which is new for this season. The Mazda team will be the first to test this race chassis.

Extensive testing of the Mazda RT24-P will begin later this month before a race debut in January. In the meantime, it’s on display at the LA Motor Show.

Do you think this looks as good as other Mazda show cars like the RX-Vision? Let us know in the comments below...