The duo have released a new teaser image of their upcoming concept coupe, set for reveal at this year’s Shanghai Motor Show 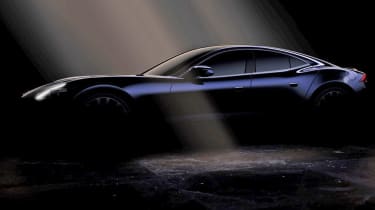 Karma Automotive has teamed up with the Italian design house Pininfarina, with plans to unleash three new models at the 2019 Shanghai Auto Show. The pair’s show stand will feature a low-slug two-door coupe, a next-generation Karma Revero saloon and a concept supercar called the Karma Vision.

Karma’s collaboration with Pininfarina was quietly announced in January this year. The pair say the partnership is aiming to push the Karma brand into the upscale EV marketplace, currently dominated by the likes of Tesla and NIO. The brand’s expansion will start in the United States before moving into Europe and Asia.

Little information has been released about the design of Karma’s latest concept coupe, and this new teaser shot is only the second image the company has disclosed. All we know is that its styling was penned by Pininfarina and, given Karma’s reputation, it’s more than likely to feature an electrified drivetrain.

Karma’s refreshed Revero saloon and Vision concept have also been teased, with a pair of equally shadowy images. The three new models will form Karma’s ‘Shanghai Big Three’ product announcement. As part of its business plan, the firm also aims to acquire and develop a range of electrification, connectivity and artificial intelligence technology for its upcoming cars to ultimately grow its position in the global EV marketplace.

Karma’s CEO, Dr. Lance Zhou, said: “our business and product plan is driven by collaborating with like-minded and nimble partners, such as Pininfarina, whose design expertise will help us accelerate the product development, differentiation, and personalized customization that allows every Karma to be truly special”.

The firm’s Shanghai announcement is the first we’ve heard from Karma since it released its outgoing Revero range-extender electric vehicle. Powered by two electric motors, it produces 398bhp and 1,330Nm of torque, can do 0–60mph in 5.4 seconds and has a top speed of 125mph. It has an all-electric range of 50 miles or, when the batteries are being charged by the on-board petrol generator, a range of 300 miles.

What are your thoughts on Karma’s latest concept car? Let us know in the comments section below…