The crazy cars of the 2015 Tokyo Motor Show

Tokyo Motor Show is known for chucking car design handbook out the window so, for strange automotive creations, it's the place to be... 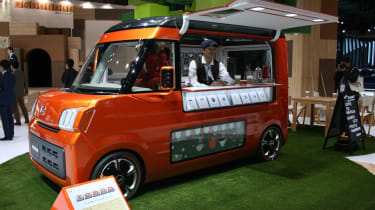 For fans of weird and wacky cars the Tokyo Motor Show is like Aladdin’s cave, Valhalla and Willy Wonka’s Chocolate Factory all rolled into one.

Generally speaking, car manufacturing is a very serious business but there are times when car brands big and small give us cause to smile, snigger or look on in utter bemusement. It’s safe to say that the Tokyo Motor Show plays host to more of those moments than any other international motor show.

This could be due to a number of factors but two key points play a major part. First, Tokyo is always awash with concept cars. The designers of these vehicles are given much freer reign that those penning production models that may actually have to turn a profit at some point in the future. It means all sorts of oddball ideas can, and invariably do, creep in.

Second, Japan is a country with its own unique style, culture, tastes and automotive regulations. They can be very different to what we’re used to in Europe and as a result, cars that seem ordinary to the Japanese eye would be weird curiosities on European roads and the same goes for some of the Tokyo Motor Show exhibits.

It all goes to make the Tokyo show an enthralling culture clash, a free-thinking breeding ground for automotive ideas good and bad. Below are the strange creations that caused our jaws to drop in 2015… 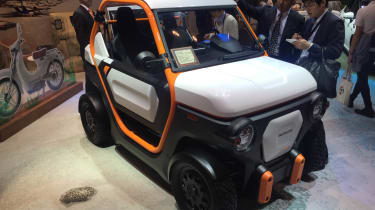 This dinky little, two-seat EV buggy features a detachable mobile battery pack, which also powers the wheels. The battery is available in different power outputs and there is a whole range of customisable features available for people to personalise it. 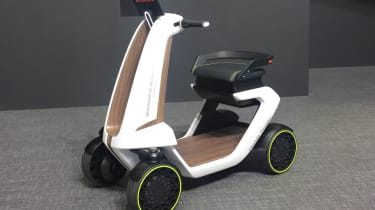 Think of it as the modern day mobility scooter that’s available for everyone. It comes fitted with a tablet which can display navigation information and a V2X system uses WiFi to allow the rider’s family members to locate the Wander Walker with their smartphone. 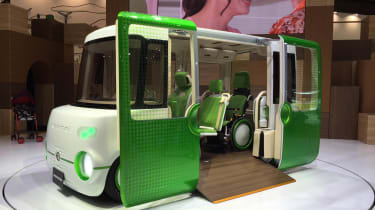 You can generally rely on Japanese microcar maker Daihatsu to produce some oddities for the Tokyo show, and it didn't disappoint this time. One of the more eye-popping sights on its stand was the Noriori.

It's best described as a boxy mini minibus designed specifically with the disabled in mind. Its party piece is a particularly low floor, with virtually no incline, which makes it easy for wheelchairs to be pushed in.

Access is made even simpler by the fact there are sliding doors that open like those on London's tube trains on either side – and there's even access at the back too. Two wheelchairs can fit in beside the seats, while a green and white colour scheme ensures you wouldn't miss it on the road.

Can’t fit your car into a parking space? No problem… fold it up. That’s the premise behind the ‘transformable’ Exmachina Ultra Lightweight Vehicle electric concept. A press of a button on the Niigata company’s creation sees the wheelbase retract and the bodywork push upwards to reduce its size – which, at 2,680 mm long, and 1,475 mm wide, is pretty compact anyway.

The firm says a production model will go on sale next year in Japan, and will be driveable on some public roads. Around 100 are expected to be sold in the first year; the price is 3,300,000 yen, which translates to just under £18,000. 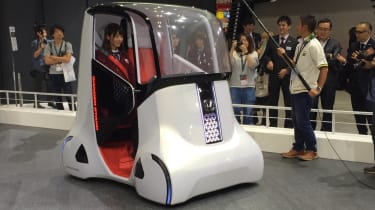 Honda has put its name on some pretty wacky innovations in the past – and Wander Stand is the latest. Essentially a pod on wheels, it measures 1,848mm  high, 1,249mm wide and 1,991mm long, and can be driven forwards, backwards and even diagonally. And the great news is this urban mobility solution can be enjoyed by more than one, as there’s room for two to sit side by side. There’s an information display on the windscreen, too.

It’s not quick, though – having seen one in action, even a Honda Jazz would have nothing to fear in a drag race. 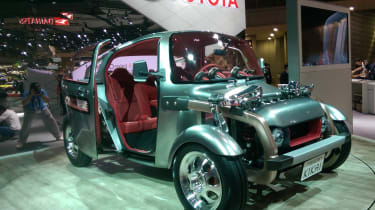 Toyota’s Kikai is a concept in it’s purest form. It's designer was pretty much given free reign to create this thing. With exposed mechanicals and a three seater arrangement, with the driver located centrally, it’s a fabulous looking machine, which would cost an absolute fortune to produce. And would never meet safety regulations. 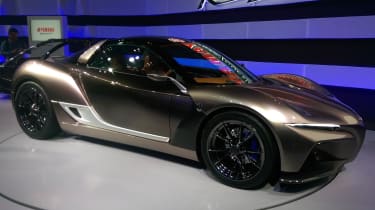 The Yamaha Sports Ride isn’t actually that wacky, but we were just blown away by this car. Styled by Gordon Murray, the man who penned McLaren F1, it’s a Japanese answer to the Alfa 4C. With a Carbon tub and a kerb weight of just 750kg it’s a car which would deliver seat of the pants handling and possibly even zero emissions. That’s because while this concept is fitted with a petrol engine, it could also be powered by an electric motor, if it was built. Which it never will be. Sadly. 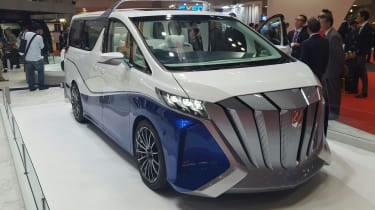 Created by Tokyo Auto Body and based on a Toyota Alphard MPV, this prototype people carrier is recognisable due to its deep, aggressive grille. It’s a little out of place – just like the full roll back soft-top roof – but you can’t help but marvel at the fusion of what Alphard claims is a combination of “the feel of a marine cruiser and the cabin of a yacht’s deck.” It might not be practical (or attractive), but this convertible MPV sure is fun. 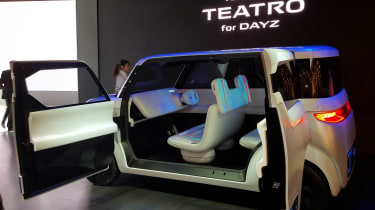 Social media is an ever-present force In the modern world and if the Nissan Teatro for Dayz concept is anything to go by, it's about to take over your car. The Teatro for Dayz is another cute, boxy Tokyo concept car with a lounge style interior that's been designed more around the activities of updating your Facebook status than driving. The door trims, dash and seats have all been fitted with digital displays while conventional buttons and dials have also been ditched in favour of voice control and motion sensors. Welcome to the future.

Get all the big news stories from the 2015 Tokyo Motor Show here...