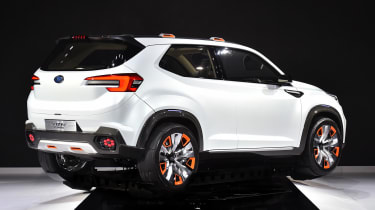 As predicted, the 2015 Tokyo Motor Show brought us a glittering array of new cars and concepts. The collection of weird and wonderful concept cars was particularly eye-opening with Mazda’s stunning rotary-powered RX-vision stealing the show in the eyes of many.

Other highlights included the LF-FC concept from Lexus and Subaru’s Impreza concept but as well as the new designs providing a feast for the eyeballs, Tokyo served up a useful, and occasionally comical, insight into the future of car technology.

Hydrogen was a particular buzzword, with Toyota and Honda both showing off fuel cell powered machines while autonomous driving aids also cropped up time and time again. Connectivity was another major theme with designers exploring innovative ways to bring social media and other internet services seamlessly into their cars. Some of the efforts were more seamless than others but we were left in little doubt that web connectivity is coming to our cars in a very big way.

Scroll down this page for all the key news stories, pictures and video from the 2015 Tokyo Motor Show... 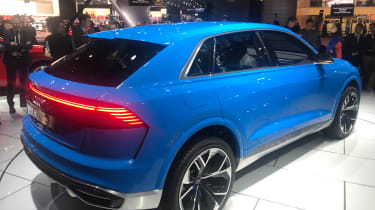 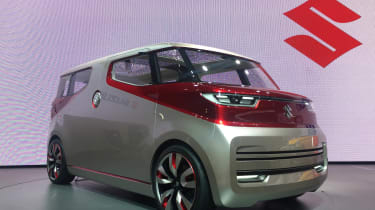 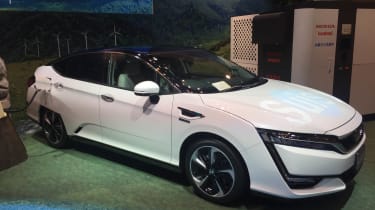 Following on from the FCX Clarity, Honda debuted a new and more advanced hydrogen fuel-cell vehicle at Tokyo. Unlike the old car, the Honda FCV is expected to be available to buy outright, and will even come to the UK. It gets an impressive 435-mile range, too.

On top of that, Honda has announced new turbocharged VTEC engines for the next generation Honda Civic and lifted the lid on plans for an all-electric sports car. We were given drives in a turbo-engined Civic and a ride in an electric sports car prototype based on the CR-Z coupe at a pre-show event. 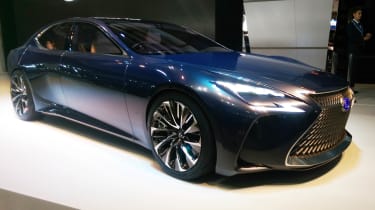 The star of the Lexus stand at Tokyo is a new hybrid coupe concept called the LF-FC, that previews tech for the next LS luxury saloon. Toyota's luxury division is also showing us its all-new RX SUV and updated GS saloon range. 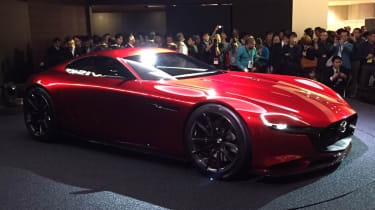 The Mazda RX-Vision is a sleek front-engined, rear-wheel drive two-seater that points to a possible future RX-9 production model in 2017 from the Japanese brand, and is sure to be welcomed by fans who lamented the axing of the RX-8 four-door coupe in 2012. 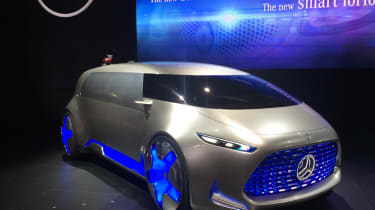 Mercedes has unveiled its forward-thinking Tokyo Vision concept at the Tokyo Motor Show. It showcases Mercedes’ vision of the future of driverless luxury travel and is a reinterpretation of the F 015 Luxury in Motion concept. 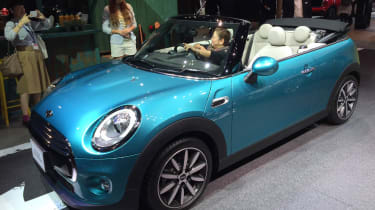 Winter is just around the corner in the UK, but MINI is already prepped for the spring sun with the unveiling of its new MINI Cooper Convertible. Set to go on sale in March 2016, the new MINI drop-top will cost from £18,475, an increase of £750 over the outgoing car and we've taken a good first look at it on the MINI stand at the 2015 Tokyo Motor Show. 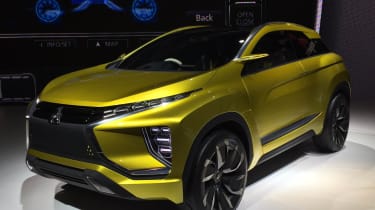 The eX is a dynamic crossover-SUV design that showcases both a new full-electric powertrain, and the design direction for the next generation ASX. The eX has the a similar angular front-end to the XR-PHEV concept show at the 2015 Geneva Motor Show, while the high wasitline and small glasshouse are pure Range Rover Evoque. The two-tone rear-end is distinctive, if less coupe-like in design than the XR.

Previewing the next-generation of driving assistance systems and technology, the EMIRAI 3 xDAS is another concept from Mitsubishi Electric. It comes fitted with a raft of tech promising to ‘enhance the safety and comfort of driving.’ 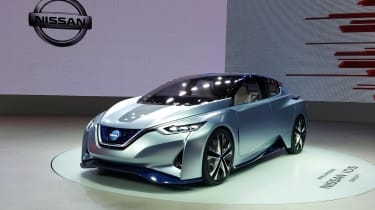 The Nissan IDS autonomous electric vehicle concept has been unveiled at the 2015 Tokyo Motor Show, showing the Japanese brand’s future design, as well as cutting edge tech we can expect to see on the road in the next five years.

Standing for Nissan Intelligent Driving, the IDS concept uses advanced artificial intelligence to learn different driving styles and adapt to road conditions. In Piloted Drive autonomous mode, the software imitates the driver’s own style – from accelerating to braking and cornering – using information on road conditions fed back from an array of sensors and cameras.

Nissan's other concept is the Teatro for Dayz. Meaning 'Theatre for Days',  this boxy little concept previews a fully digital interior design that can even show photos on the dashboard, instruments and doors. On the outside, there are familiar Nissan design cues seen in the v-motif grille and narrow headlamps, but Nissan says it dropped design elements that would portray speed, size or elegance as “this car's identity belongs to the owner, and design assumptions we make just limit their creativity.” 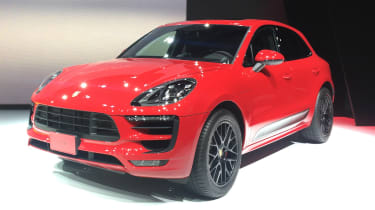 The Porsche Macan range is hotting up, as the brand has revealed a new GTS version of the sporty SUV at Tokyo. Priced from £55,188, the more focused model features extra power, an uprated chassis and racier styling details. 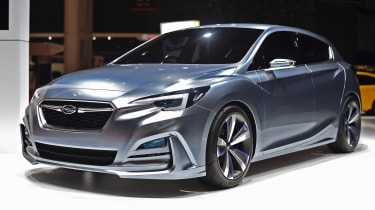 Subaru has revealed a next-generation Impreza concept at Tokyo, and a new SUV concept that previews both autonomous driving tech and the design direction of the next Forester.

The Impreza concept has a squat, purposeful stance, with wide wheelarches and oversized wheels giving a sporty look. The coupe-like roofline and rising waistline add to this, while the angular rear end is sleeker than before. Overall the car adopts a far more modern and minimalist approach than that in the dated current car.

The Viziv, on the other hand is a rugged lifestyle SUV that, the firm says, "gives a glimpse at the future Subaru has for the brand". The exterior features familiar Subaru design cues but with a bolder approach than we've seen before, and almost certainly previews some of what we can expect from the next Subaru Forester. 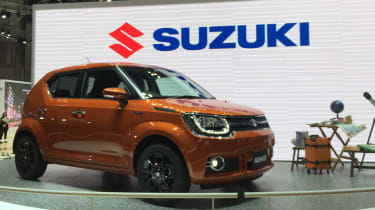 The production ready version of the dinky city car crossover has been revealed at the show, and will revive the Suzuki Ignis name. Suzuki is also showing the Mighty Deck and Air Triser concepts. Yep, you heard that right. One is a miniscule pick-up truck with a retractable canvas roof and electric load deck, and the other is a bonkers miniature camper van with back-to-front styling.

Toyota has debuted a small MX-5 rivalling coupe design at the Tokyo show, alongside some truly insane concepts and a 10cm robot that talks to you in your car.

The coupe is known as the S-FR. Standing for Small Front Engine, Rear-Drive, it’s 2+2 sports car that Toyota says will be its entry-level sports coupe. The coupe tips the scales at about 980kg and is powered by a naturally-aspirated 1.5-litre four-cylinder petrol engine generating around 130bhp, putting it right in Mazda MX-5 territory.

By unveiling the FCV Plus Concept at Tokyo, Toyota is putting its weight behind the burgeoning hydrogen movement. Earlier this year, Toyota became the first manufacturer to launch a production hydrogen-powered fuel-cell car in the Mirai. Looking more like a spaceship than a car, the FCV Plus is a four-seater vehicle with a more compact rearrangement of the Mirai’s fuel-cell stack and hydrogen tanks.

With the Kikai concept Toyota is questioning the way cars are made and the level of craftsmanship that goes into them. the designers have taken the machinery, normally hidden beneath the car’s body and brought it out into the open, making the function a component of the exterior. 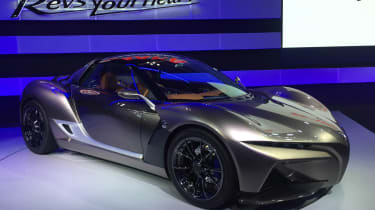 Yamaha has once again entered the concept fray at this year's Tokyo Motor Show, with a mid-engined sports car

concept dubbed the Sports Ride. Yamaha is a name traditionally associated with motorbikes, engines and musical instruments - but the firm occasionally turns its hand to producing a car, even if many never make production. This time it has enlisted the expertise of designer Gordon Murray. 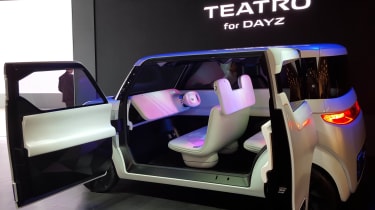 Which cars are you looking forward to most at the 2015 Tokyo Motor Show? Tell us in the comments section below...