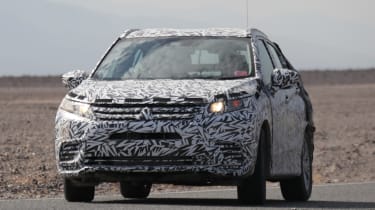 Mitsubishi has finally unveiled its dramatic XR PHEV II concept at the Geneva Motor Show. With a plug-in hybrid powertrain, it's expected to join the Outlander PHEV SUV in the firm's line-up when it reaches production before the end of this decade.

Likely to aim above supermini-SUVs such as the Renault Captur, the sharp-looking 'urban crossover' is an updated version of the XR PHEV we saw at last year's Paris Motor Show. Much of the car looks similar, but additions and tweaks make it more production-relevant, while there's also a functioning interior. 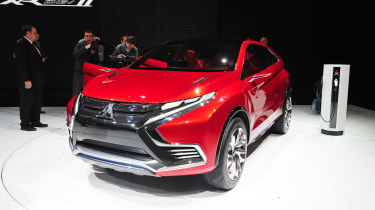 The exterior gets a development of the Japanese firm's family face, grafted on to a dynamic and rakish profile. The muscular lines and steeply rising window line have more than a hint of the Range Rover Evoque, while the sporty cabin is driver-focused and features an angled centre console.

The concept debuts the latest form of Mitsubishi's 'PHEV' plug-in petrol-electric hybrid powertrain. It's described as a "lightweight, compact and high-efficiency front-engine/front-drive system" and the electric motor produces 161bhp. Combined with a range-extending petrol engine of undisclosed capacity, the powertrain also emits 40g/km of CO2. 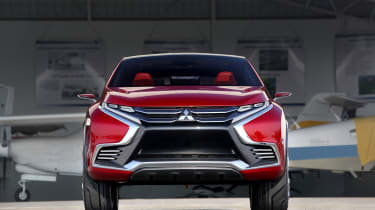 The previous concept was more of a traditional hybrid with a 132bhp 1.1-litre turbo petrol engine, but the XR PHEV II is expected to follow on the trend of a small 'generator' unit to charge up the batteries when flat, in the same vein as the BMW i3.

The concept fits in with the firm's plans to have hybrid or fully electric models across the entire range in the next few years. According to Mitsubishi UK managing director Lance Bradley, the target is for 20 per cent of production to be electric models by 2020.

Do you like the look of Mitsubishi's latest concept? Let us know in the comments below!

Renault, Nissan and Mitsubishi have confirmed a rigorous cost-saving scheme, which will save the Alliance a total of £1.8 billion
Visit Mitsubishi MI-TECH concept SUV