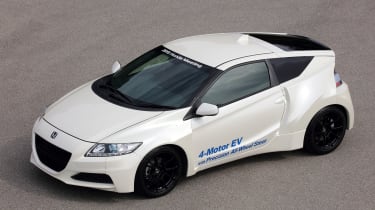 Honda has told Auto Express it is evaluating plans to bring an all-electric sports car to the global market, based on the technology it used in a CR-Z racer. The race car competed at the famous Pikes Peak Hill Climb in Colorado earlier this year.

Honda has developed a road-going prototype of the CR-Z, which uses four electric motors – one housed on each wheel – and a 16kwh lithium-ion battery. Power output comes to around 250bhp, which is roughly half of the power developed by the original race car.

Officials declined to disclose a torque figure, but claimed 0-62mph in 3.5 seconds and a top speed of 130mph. They also stated that optimum power would be around 350bhp, targeting a range of 250 miles on battery power alone.

“We are making every possible effort to make it to the market,” a Honda insider revealed. “We now have to think about the commercial aspect.” 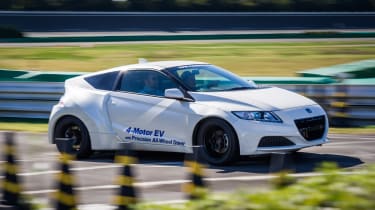 Because each wheel is powered individually, the system can vector torque right to left and front to back – although bosses told us it isn’t possible to send 100 per cent power to either end.

• The future of Honda: Q&A with Honda Boss Takahiro Hachigo

Another unique feature of the prototype over other EVs is Honda’s Precision All-Wheel Steer system, which allows the rear wheels to turn up to angles of three degrees to aid handling and agility.

No information has been given on when the car might make production, but with more and more car makers eyeing up all-electric sports cars, there’s no time like the present.

Would you buy an all-electric sports car from Honda? Let us know below...