As the Volkswagen Passat saloon gains petrol power, we test the 1.4 TSI turbo against its bigger-capacity Mazda 6 rival 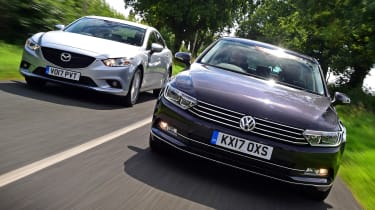 Volkswagen launched its Passat Mk8 back in 2015 with an all-diesel engine line-up. However, in the few years since, the firm’s fortunes have taken a downturn when it comes to diesel, so petrol power is now a more attractive option.

As a result, 1.4, 1.8 and 2.0 TSI turbo petrol engines are now available in the Passat, and here we’re testing the smallest version in 148bhp specification.

At £24,740 in what’s likely to be the popular SE Business spec (our pictures show a GT model), the Passat saloon stands square in the firing line of the Mazda 6 2.0 SkyActiv-G.

In this £21,895 SE-L Nav trim, the Mazda has a price advantage over its German rival, but this battle will also be fought between VW’s turbocharged, downsized approach and Mazda’s ‘right-sized’ naturally aspirated philosophy.

Both cars will have to combine comfort and agility with kit and economy. But which makes the more convincing case? 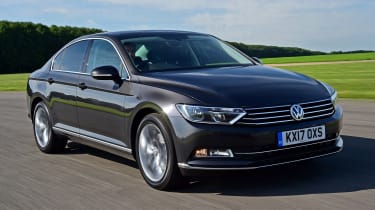 For: Turbocharged torque delivers easy performance, advanced interior technology, material and build qualityAgainst: Not as composed or as much fun to drive as the Mazda, more expensive to buy

Car companies are investing heavily in an electrified future, with brands making statements about hybridisation in only a few years to come. But fossil fuel certainly isn’t dead yet, and although diesel may be a dirty word, petrol power is enjoying a renaissance.

The Volkswagen Passat is the perfect case. Launched in 2015 with a line-up of only diesel engines, the large family saloon is now offered with the 148bhp 1.4-litre four-cylinder turbocharged unit we’ve tested here. 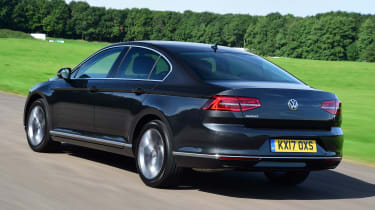 But the wait has been worth it because the motor is sweet. Both cars use a six-speed manual transmission, but the VW has the edge in gear thanks to its 250Nm of torque. This is available from just 1,500rpm and is 40Nm more than the Mazda’s output, which is produced much higher up the rev range at 4,000rpm, meaning it’s not quite as accessible. It’s therefore no surprise that the Passat was 2.3 and an incredible 5.1 seconds faster than the Japanese machine between 50 and 70mph in fifth and sixth respectively.

The advantage in the lower gears wasn’t as great because the Mazda was further into its power band, but the Passat still offered stronger punch and more performance at the test track.

There’s a level of grip and agility to match the engine’s grunt, too. The Passat uses VW’s MQB platform, which is obvious from the moment you start moving; the steering is nicely weighted and precise, but lacks the Mazda’s feel, while the damping delivers solid body control, even if it can’t match its rival for comfort.

Alongside the VW’s performance advantage, it has a much more upmarket, higher-quality feel inside. The plastics are plusher and the layout is more logical, while in SE Business trim you get a respectable level of equipment. 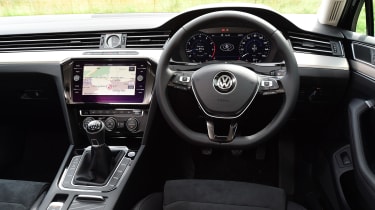 This includes adaptive cruise with emergency braking, all-round parking sensors, sat-nav and climate control. The Mazda matches this Passat SE Business in its SE-L trim, while it’s also substantially cheaper. This price gulf is less of an issue if you’ll be buying on finance, because the VW’s stronger predicted residual values go some way to narrowing the gap.

It’ll still be more expensive, but you do get more for your money, not least when it comes to refinement. You also don’t have to work that turbocharged engine as hard, while it’s also quieter than the Mazda if you do. 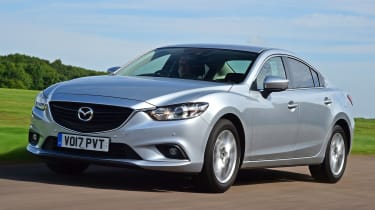 For: Composed ride, sweet steering and gearbox, willing naturally aspirated powerplant Against: But engine is noisy when revved (and it needs to be), poor material quality, infotainment

The engines partly define the driving experience of our two test contenders; the Mazda 6 uses a naturally aspirated 2.0-litre against the 1.4 TSI unit in the Volkswagen.

The company’s philosophy means you have to work the motor in the 6 a little bit harder. It’s slightly down on power with 143bhp, but what’s more noticeable is the 40Nm torque deficit.

This is also produced 2,500rpm higher than in the Passat, and refinement is affected by having to rev the Mazda’s motor harder. 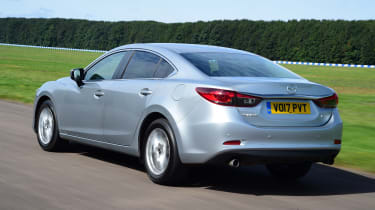 It’s a smooth unit and welcomes hard driving, which is good, because you’ll need to treat it this way to extract the performance; of which there is plenty available. Yet whereas the Volkswagen’s engine is fairly quiet, the Mazda is more vocal. There’s not much to split these cars once you settle down to a motorway cruise, although the response in top gear is better in the VW.

However, under full throttle conditions for our 0-60mph test at the track, the Mazda was actually faster, taking 8.6 seconds to complete the dash compared with 9.2 seconds in the VW.

Traction off the line wasn’t as good as in the Volkswagen, but once the 6’s engine is up in the higher reaches of the rev range, there’s a decent turn of speed, and this explains this superior sprint time. The Passat’s gearbox shifts nicely, but the Mazda’s is even sweeter; it allows fast, precise gearchanges, which was also a big factor in its impressive run off the line.

Most driving isn’t full throttle, though, so the extra torque and flexibility the VW’s engine brings will be more beneficial more of the time. 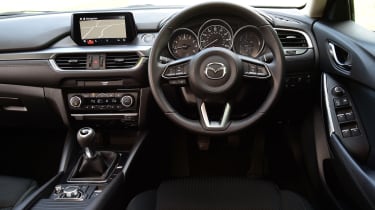 The 6 counters this with plenty of comfort and an easy, unruffled feel to its suspension damping and body control. It doesn’t have the slightly firmer edge of the VW, which was partly down to the Mazda’s smaller wheels and taller tyre sidewalls. Yet there’s still more than enough precision and control from the chassis and steering, even if it doesn’t feel quite as responsive when changing direction as the VW.

Even in fairly high-spec SE-L Nav trim the 6 doesn’t seem quite as upmarket as the Passat. However, it’s £2,845 cheaper and basically comes with an identical level of equipment. You get sat-nav, Bluetooth, DAB, cruise and climate control, plus front and rear parking sensors. But all this kit isn’t quite as well integrated as in the Passat and quality isn’t up to the same standard, either, so that extra outlay is reflected in the cabin. 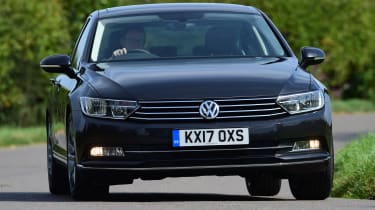 The VW doesn’t drive quite as sweetly as its Mazda rival, but in every other respect the Passat has the 6 covered. It’s more flexible, is comfortable enough, will be cheaper to run and feels more modern and upmarket. Buy on finance and the VW’s higher price will be less of an issue. 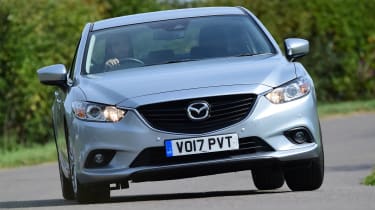 The Mazda 6 is capable dynamically, but its engine isn’t as flexible as the VW’s 1.4 where you want it to be. While the car is cheaper, it feels it. The 6 isn’t as practical, either, plus it costs more to run and trails on performance. Factor in the smaller boot, and it comes second.