Renault’s latest Scenic is targeting buyers with expanding families. Is it better than Peugeot, Citroen and SEAT rivals? 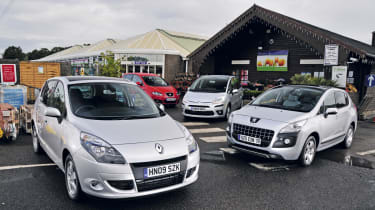 The market for compact MPVs is blossoming! Buyers looking for a family car with extra versatility have never had it so good, with a raft of new models recently hitting showrooms.

First up is the Renault Scenic. We’ve already been impressed by the seven-seat Grand version, which saw off some tough rivals to win its first group test.

The five-seater sits on the same platform derived from the Mégane, and has a similarly flexible cabin, so promises to be just as good. We test a mid-spec Dynamique model with a 103bhp 1.5-litre diesel engine, priced £17,695.

However, the Renault isn’t the only French newcomer in this sector. Arch-rival Peugeot has just revealed its bold 3008, which aims to blend a rugged off-roader image with compact people carrier practicality.

It doesn’t officially arrive in dealers until November, but Auto Express got its hands on a left-hand-drive model. No diesels were available, so we test a range-topping 1.6 THP petrol car in Exclusive trim.

SEAT has just given its stylish Altea a mid-life makeover, improving the looks and quality. And while practicality is still the model’s main focus, the brand’s sporting roots haven’t been forgotten – our Altea is the most powerful car here, with its thumping 2.0-litre diesel giving 168bhp.

Setting the benchmark in the class is Citroen’s C4 Picasso. It’s one of our favourite compact MPVs, with its clever cabin and eye-catching design. Can it hold on to its crown in the face of these fresh competitors?

Buyers in the market for a compact MPV have never been offered so much choice. All our contenders provide versatile and roomy family transport. But only one can be crowned the winner.

The Peugeot certainly attracts attention, and its stylish cabin feels special. But while it tries to combine MPV and SUV attributes, it ends up excelling at neither – although we suspect a UK-spec diesel would have performed much better in this test.

We had trouble separating the Citroen and SEAT. The Picasso’s cabin is still one of the best in the business, and we like its bold styling. It’s expensive in this trim, though – which hands the advantage to the Spanish car.

The revised Altea is fast, good-looking and practical. Better still, cabin quality is much improved and there’s plenty of kit as standard.

Both are left in the shade by the Renault. Its five-seater cabin is well thought out and solidly built, while the price is attractive, too. On top of this it’s good to drive and should be affordable to run. After 13 years on sale, the Scenic still leads the way.