Kia hopes its new Sportage will be the class of the crossover field. We see how it fares against Nissan's top-selling Qashqai 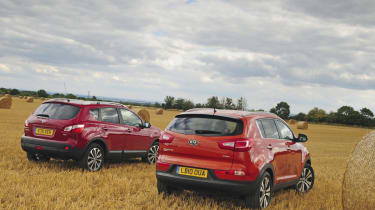 Kia is hoping to make hay with the latest addition to its range! The new Sportage slots beneath the Sorento SUV as the firm’s family-sized crossover, and aims to add a dash of style to the market.

With renowned ex-Audi stylist Peter Schreyer responsible for the newcomer, the Sportage is like nothing else on the market. But it has substance, too, as it comes with a large and versatile cabin, plus a huge list of standard kit.

For now, the Sportage is available only with a 2.0-litre diesel engine and in First Edition four-wheel-drive trim, although a wider line-up including two-wheel-drive variants arrives later this year.

Yet it won’t have everything its own way, as the Nissan Qashqai is one of our favourite crossovers, as well as one of the UK’s best-selling cars. Its revamped 2.0-litre diesel brings impressive eco credentials, and in n-tec trim it’s well equipped.

Both models offer a big dose of style, performance and economy, plus car-like handling – but only one can be our pick of the crop...

THE Qashqai has been a huge hit since it blew the family 4x4 market wide open, but it tastes defeat here. The Kia Sportage is arguably the firm’s best effort yet, mixing exciting looks, decent ride comfort and tidy handling. It also has a larger and more classy cabin than its rival, and solid build quality.

Most appealing of all is the Korean car’s price. For £2,718 less than its rival, the four-wheel-drive First Edition is better equipped and greener than the Qashai, and it comes with Kia’s trailblazing seven-year warranty.

The Nissan isn’t disgraced, though. It’s still great to drive and recent revisions have made it more eco-friendly and better looking than ever. But it can’t match the all-round brilliance of its sharp-suited competitor. The Sportage’s low price and generous kit count seal the deal for a maiden road test victory.

1. Kia Sportage 2.0 CRDi First Edition EVEN without its price advantage, the Sportage would be a deserving winner. And with its seven-year warranty, economical engine and low CO2 output, it makes a great ownership proposition. We hope the forthcoming two-wheel-drive model is as good – it could be fighting for top honours in the burgeoning crossover sector.

2. Nissan Qashqai 2.0 dCi N-TEC THE revised Qashqai is the best yet, with a neat design, cleaner engine and impressive standard specification. It’s also great to drive and boasts a practical cabin. Still, despite its recent improvements, it can’t match what’s on offer from the excellent Sportage.