Extrovert Korean has real substance to back up its bold looks 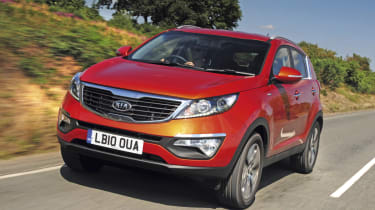 WE all expect family 4x4s to be practical, but that doesn’t mean they have to be boring – as this latest Kia proves. Take a look at the Techno Orange machine in our pictures, and you could be forgiven for thinking the Sportage is a concept car.

The crossover model is oneof the most exciting and daring Kias we’ve ever seen. With sharply styled headlamps, a striking chrome grille and a windscreen outline that rises at each corner to create a peaked cap effect, it looks unlike any of its rivals. Smart 18-inch alloys, black sills and chunky bumpers add to its rugged appearance.

The interior is not quite so distinctive, but it’s spacious and well built. The switchgear is more modern than the Nissan’s, and although the cabin can’t match the exterior for excitement, it still marks an improvement over other models in the Kia line-up.

The shapely dash is attractive and logically laid out, while the low seat provides a better driving position than in the Nissan – although we’d like a little more reach adjustment from the steering wheel. And the instruments on the Sportage house a gearshift indicator, to help make the most of the 2.0-litre engine’s economy.

The amount of equipment fitted as standard in First Edition trim is astounding, with the Kia boasting heated leather seats all round, a rear view camera, cruise control and iPod connectivity. There’s also decent legroom for passengers, comfortable seats and a flat transmission tunnel. This all helps the rear feel more spacious than the Qashqai’s, despite its narrow window.

The boot is well shaped, but the inclusion of a full-sized spare wheel makes it shallower than the Qashqai’s. Still, it does have a couple of cubbies, a luggage net, 12V socket and sturdy tonneau cover. Plus a couple of straps on the rear seats allow them to be folded in one action.

On the road, the Kia doesn’t feel as punchy as the Nissan, although it’s never underpowered.

In our in-gear tests it struggled to match the Qashqai, thanks partly to the longer gearing on offer from its six-speed gearbox. Refinement is good, while the ride is particularly comfortable, despite its big 18-inch rims.

That extra suppleness comes at the expense of handling, though, as the softer springs struggle to control body roll in bends, meaning the Sportage pitches and dives more under acceleration and braking than the Qashqai.

Our only other criticism concerns the light steering, which doesn’t inspire confidence.

At the pumps, the Sportage is greener than the Qashqai, with an official combined figure of 47.1mpg, while its CO2 output is only 156g/km. Add an impressive seven-year/100,000 mile warranty, and you can see why the Kia makes so much sense.

Chart position: 1WHY: The Sportage looks like a concept car, boasts a spacious interior and has a huge standard kit list. It’s also backed by the maker’s seven-year warranty.