First of the crossover models still has much to admire 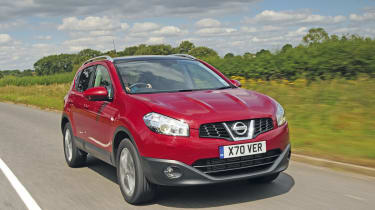 Ever since it replaced the uninspiring Almera as Nissan’s family car offering, the Qashqai has been an Auto Express favourite. And its blend of good looks, smooth engines and car-like driving dynamics is equally appealing in four-wheel- drive trim. A host of revisions should make it better than ever.

The tidy exterior is an improvement, but parked next to the eye-catching Kia, the Nissan isn’t as dramatic or exciting as its rival. The design changes have been kept to a minimum, but the face has been refreshed thanks to a new grille and more angular headlamps. Chunky black plastic cladding on the doors and under the bumpers adds to the Qashqai’s off-road appeal, and the large two-tone alloys and silver roof-rails of our test car ensure the Nissan is still one of the sharpest crossovers around.

The interior hasn’t received quite as much attention, though, and makes do with a slightly dated layout. Sat-nav is fitted as standard, but you can’t display the instructions in a supplementary readout between the rev counter and speedometer, and the main screen is positioned too low down on the centre console.

We’ve always praised the Nissan for its car-like driving position, but after a stint behind the wheel of the low-slung Kia, it feels like a 4x4 and provides a more commanding view of the road. Its seats don’t offer quite as much support as those fitted to its rival, either. It’s comfortable enough in the rear, although the sloping roofline means that headroom is at more of a premium than in the Sportage, and the Kia’s extra length translates into more legroom in the back.

On the road, the Qashqai is livelier. Its 148bhp engine is much more eager and free- revving than the Sportage’s powerplant. Against the clock, it was fractionally slower from 0-60mph at 10.6 seconds (as opposed to 10.4), but it’s quicker through the gears, adding to its feeling of flexibility.

With a stiffer suspension set-up, the Qashqai offers much better body control, but progress does tend to get unsettled over bumpier roads. And while the gearbox has a short shift, our example was a little notchy. In our braking tests, the Nissan recorded respectable figures, with a consistent feel through the pedal.

Where the Japanese car struggles to match its rival is when it comes to aftersales back-up. It can’t compete with the superb seven-year/100,000-mile warranty of the Kia, although you do get three years of breakdown cover. Both servicing and insurance costs are reasonable. The Qashqai CO2 emissions and fuel economy are also beaten by the Sportage.

However, its official returns of 167g/km and 42.1mpg on the combined cycle are reasonable.

The Qashqai still makes a convincing family 4x4, becauseit looks good and should be affordable to run. But in this test, the odds are stacked against it.

Chart position: 2WHY: One of the UK’s best sellers last month, Qashqai has car-like handling, lots of cabin space and great looks. It’s just been revised, and is cleaner and more efficient.