Who better to design an off-roader than Subaru? 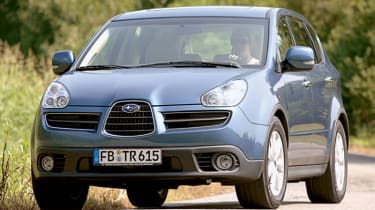 For nearly £5,000 less than the BMW X5, the mid-range five-seater Tribeca provides lots of compact SUV for your money. Our seven-chair version’s striking styling, comfortable and well equipped interior, plus its powerful engine, will make the Tribeca a very tempting option when sales begin in November. Its only big drawback, then, is that there’s no diesel engine on offer.

Who better to design an off-roader than Subaru? After all, the brand made its name with rugged 4WD pick-ups for farmers and sporty 4x4 saloons for keen drivers.

Until now, though, the company has steered clear of full-size SUVs, claiming its four-wheel-drive system was intended for improved performance and stability rather than mud-plugging.

But, thanks to leaps in suspension and chassis technology, some 4x4s claim they have every right to be seen as high-performance cars, too. So Subaru has chosen to move off-road and into uncharted territory, the result of which is the striking B9 Tribeca. Bearing smart, chiselled looks, the newcomer has a less rugged image than the BMW X5 or its seven-seater rival, the Volvo XC90.

Inside, an interesting, cocoon-like cabin features a wraparound dash and good-quality materials. Not so clever, though, are the large panel gaps bet­ween trim and bodywork.

As with other compact seven-seat models, the Tribeca pays lip service to the extra bench. Even with the middle row slid to its most forward position, there is no space for even a child-sized foot to clamber into the back.

Boot access is good, however, with a high hatch revealing 1,502 litres of luggage space once all the rear seats are laid flat. Our car was well equipped, with 18-inch alloys, air-con, a DVD player with wireless headphones, sat-nav and a reversing camera as standard.

Driving the Tribeca is pretty effortless. Sharing its platform with the firm’s Legacy, the B9 has 213mm of ground clearance – nearly 20 per cent more than the X5. Yet it handles corners surprisingly well, largely thanks its flat-six engine, which creates a lower centre of gravity and helps reduce lift. The ride is also incredibly smooth and quiet, despite the initially firm feel of the suspension set-up.

However, the five-speed auto shifts up too early, forcing downchanges in order to accelerate quickly; in sport mode, it has the opposite problem. Yet on the motorway, none of that matters and from 2,500rpm, the Tribeca comes into its own. All the power kicks in, making light work of overtaking and surging ahead of the traffic.

You pay for it with fuel economy, though. Even the extra-urban figures barely achieve 30mpg, and there are no plans for a diesel. Yet this is a landmark car for Subaru. It deserves to do well – but, in a crowded marketplace, only the very best will do.