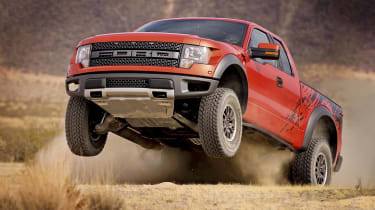 This is an impressively engineered, eye-opening version of America’s big-selling F-150 pick-up that feels indestructible, looks wonderfully aggressive and is blisteringly fast. It would look completely out of place in the UK, but the world would be a worse place without the Raptor. And if we lived in the Nevada desert, we’d want to drive nothing else!

“Crazy.” That’s how one of the Ford Raptor’s engineers described this range-topping version of the firm’s F-150 pick-up truck before we got behind the wheel in the Nevada desert this week.

And he wasn’t wrong.

Once America’s best-selling vehicle, the F-150 has had to adapt, as US drivers swap cubic capacity for mpg. To keep interest alive, Ford has upped the excitement on offer. As a result, this is oneof the most insane vehicles we’ll drive this year. It looks more Baja racer than roadgoing pick-up, with similar go-anywhere ability. Under the bonnet lies a Ford Special Vehicles Team-tuned 5.4-litre V8 producing 310hp (an even bigger 6.2-litre version is on the way), and it drives the rear or all four wheels via a centre differential.

There’s nothing politically correct about the F-150 Raptor SVT, which offers 17mpg at best. We tried it out on a tough and dusty off-road course, where we were encouraged to tackle jumps, humps, ruts and dusty divots at speeds of up to 60mph.

And the Raptor soaked up the abuse with ease. It was completely unstoppable.

Our car came with Ford’s £500-a-corner Fox Racing Shox to tackle the bumps, along with 12-inch springs at the front and rear. It may be old-school technology, but it certainly works!

What’s most impressive, though, is that Ford’s SVT team has set the Raptor up to be as compliant on normal roads as a standard F-150.

And despite its incredible off-road talents, the Raptor is a stock production model that costs only $43,000 (£25,000) in the States. It’s totally irrelevant over here  – but that doesn’t stop us from wanting one