don’t be fooled by the softer look – the new 5-Series is more capable than ever! 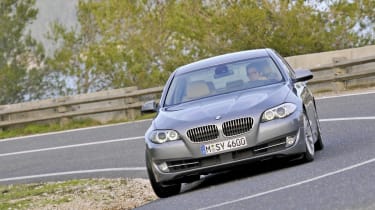 BMW has really hit the bullseye with its new 5-Series saloon. The design is less confrontational and yet just as dramatic as its predecessor’s, while the car is extremely good to drive. The interior is comfortable, and buyers should be reassured by the promise of top residual values. Under the bonnet, the new 3.0-litre turbocharged engine is a star attraction. Delivering an impressive 302bhp, it always has plenty of thrust, yet is much more efficient and economical than the previous powerplant. Executive car drivers have never had it so good.

There are some long faces at BMW... Slow sales in 2009 meant the firm’s 5-Series lost its coveted crown as the world’s favourite executive saloon to rival Audi’s A6. Now, a new version is out for revenge.

The latest evolution of the 5 promises to set fresh standards in this competitive class, thanks to a combination of cutting-edge technology and carefully judged design. Its initial impact is very different to that made by the previous 5-Series. Back in 2003, the then all-new saloon shocked with its aggressive design and profile – and it turned the firm’s conservative image right on its head.

BMW isn’t playing the same trick again. Although the car still proudly displays the brand’s trademark dual-kidney grille at the front, the styling is much safer by comparison. There’s also a softer-looking, curved bonnet to satisfy pedestrian impact regulations, while the lights appear familiar – they’re virtually identical to those of the latest 3-Series and X5.

In profile, the car now has a coupé-like silhouette, while the new 17-inch wheels, fitted as standard across the range, fill the bodywork better than the previous 5’s 16-inch rims.

This results in a sportier stance which doesn’t rely solely on flared arches and big exhausts to make an impact. And there’s more to look forward to inside, with comfortable seats and a commanding driving position. Material quality is first rate, and the huge multimedia screens are easy to navigate.

What’s more, the UK version of the 5 has been engineered with the steering wheel on the right from day one. That promises a better driving position, plus neatly ordered controls.

It’s anticipated that 95 per cent of all owners will specify the new eight-speed auto first seen on the latest 7-Series – and our car featured this slick-shifting unit. It feeds the 3.0-litre turbo’s 302bhp to the rear wheels, and helps the BMW deliver heady mid-range urge despite its 1,700kg kerbweight.

Refinement is first class, and even at high speeds the cabin is pleasantly free of excessive wind noise.

The ride is supple and refined, without being too soft. Our car also had the optional four-mode Driving Dynamics Control system, with Comfort, Normal, Sport and Sport+ settings to progressively sharpen the chassis. It speeds up throttle and shift responses as well, and along winding roads makes a considerable difference to the handling.

Integral Active Steering is another new option. This promises to improve all-round road manners, from low-speed manoeuvrability to high-speed stability. At its core is an active rear-wheel-steering arrangement which ensures the 5 turns into corners more rapidly than before. There’s a new aluminium front axle, while the engine is set as far back in the bay as possible – and all this means the new 5-Series is one of the most accomplished driver’s cars BMW has ever launched.

There will be plenty of choice, too, with six powerplants on offer when UK deliveries begin on 10 March. These start with the six-cylinder 525d and 530d turbodiesels – the latter can be specified with BluePerformance technology, which complies with Euro VI emissions rules.

Direct-injection petrol six-cylinders feature in the 523i and 528i turbo, as well as our 535i turbo, plus there’s a 402bhp V8 bi-turbo. Later in 2010 we’ll get the EfficientDynamics 520d, with a supermini-rivalling CO2 output of 132g/km. Estimates suggest a six-speed manual version of this will also return strong economy of 56.5mpg.

Later come xDrive 4WD variants, an ActiveHybrid 5, the estate and the fifth-generation M5. The latter is said to have a 550bhp twin-turbo V8. And while British buyers won’t get a Sport pack at launch, it will be offered by the start of next year.

The new 5-Series is the very best model in its class – and the competition, including the A6, should be scared all over again.

Rival: Mercedes E350 CGI E-Class has a very different, edgy look, and for the hugely competitive price, you get a refined and capable cruiser.