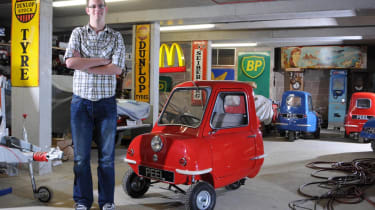 The Peel is unlike any car you’ve ever driven! With its dinky front wheels and clever design, plus its tiny turning circle, it could be the answer to traffic-choked town centres. Now the electric model has support from Dragon’s Den investor James Caan, there are also plans for a £100,000 collector’s edition, complete with customised features. If you want to own a piece of history, the P50 is ideal – although only 21 of the 50 are still available.

IT’S the city car that brings new meaning to the word ‘compact’! Following its star appearance on BBC TV show Dragons’ Den, the tiny Peel P50 is big news – and Auto Express couldn’t wait to give the world’s smallest car its toughest test yet.

We got our first taste of the P50 at Ripley’s Believe It Or Not! museum in London’s Piccadilly Circus. The British-built two-seater is 1,372mm long, 1,041mm wide and 1,200mm high. It already has a place in the Guinness Book of World Records – and it’s dwarfed by my massive six foot eight inch frame!

You climb aboard through a single door – when it’s open, this is also the car’s only source of ventilation. There’s no air-con, windows or vents. But simply getting in the Peel requires skill. As it’s so low to the ground, you can’t just rest your backside in the seat and swing your legs in.

Instead, you put one hand on the roof, fold a leg in, step a foot over the steering wheel and then duck under. It sounds tricky, but soon becomes second nature.

Once you’re inside, headroom isn’t great, although the cabin has surprising room in other respects. There’s space for shopping to the right, under the leather seat and under the dashboard.

Our P50 is electric, so start-up is silent – turn the key, and a green light on the charge indicator tells you the car is running. There’s no seatbelt, gearlever or brake pedal, either; to pull away, you flick the switch for forwards, select a speed setting (tortoise for pavement; hare for the road) and press the accelerator.

Maximum torque is available from zero revs, with power sent to the wheel mounted beneath the seat. The car takes a second to reach cruising speed of 8mph, and as there’s no brake pedal, you just lift off to stop. Take your foot off the throttle sharply, and you come to an abrupt halt.

Not surprisingly, all the controls are within easy reach, with switches for the horn and lights to the right of the driver. Even the control for the hand-operated wiper makes sense, above the windscreen. The low shoulder line and large expanse of glass give a great view out, and the addition of a reverse gear means parallel parking is easy.

The steering column goes straight between your legs, and as there’s no adjustment for reach or rake, you rest your hands on top of the three-spoke-wheel. Most Auto Express first drives take in country roads and motorways, but for the Peel P50 we followed a more appropriate route. We headed to a shopping centre, queued up at the Post Office and took a tour around WHSmith – and the tight turning circle made manoeuvring easy.

During our hour-long drive, we covered two miles and used one-third of the battery’s range. Peel says the car will go around 20-30 miles in tortoise mode. A full charge from the mains takes an hour, and costs 50p.

With its simple features and quirky styling, the P50 was an instant hit on the road and in the shopping centre. Passers-by took pictures as if we were driving a supercar – yet this celebrity kudos costs only £12,500!