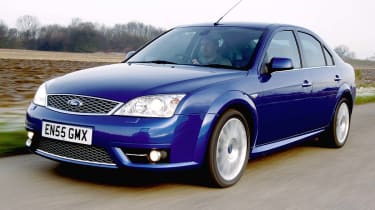 Pitched against the latest Octavia, the six-year-old Mondeo does seem rather past it. But thanks to its distinctive – if extremely familiar – styling, it still manages to look fresh, especially this ST variant.

It doesn’t have a particularly striking front end, but the chrome grille, airdam and reshaped bumpers help distinguish it from lesser models, while the lower ride height, side skirts and 18-inch alloys give it an aggressive profile. At the rear, a subtle lip spoiler is used, and as with the Octavia, the badging is one of the few ways to tell the TDCi apart from the petrol model.

The cabin has a chrome gearlever surround, metal steering wheel inserts and ST badging. Unfortunately it doesn’t get the Recaro sports seats of the V6 model, instead making do with standard part-leather chairs. Although there is little wrong with these, they’re not as comfortable as the Skoda’s, and we think it’s a major oversight that the figure-hugging Recaros were left out – as a result the cabin feels less sporting.

Ergonomically it’s well laid out, though, with all the dials, switches and buttons easily visible and simple to use. But by current standards, the lack of storage is poor. There’s a central box which doubles as an armrest, but it’s pretty small, and the door pockets aren’t particularly big either. Elsewhere practicality is better, and rear passengers enjoy generous legroom, thanks to the Mondeo’s longer wheelbase. The 500-litre boot, which extends to 1,370 litres with the seats folded, is also useful.

What’s more, the driving position can’t be faulted, and neither can interior quality. Thanks to excellent soft-touch dash materials and tough construction, the Mondeo is still up to class standards.

But the cockpit isn’t as sophisticated as the 2.2-litre Duratorq diesel. Developed from the standard 2.0-litre TDCi oil-burner, it loses out to the Octavia in terms of horsepower, but has much more torque – 400Nm peaking at an identical 1,800rpm. However, the most obvious difference has nothing to do with power and performance – it’s the engine’s refinement that is most impressive.

Power delivery is smooth, and the wave of torque is produced at a steady rate, rather than the sudden rush you get from the Octavia. This makes it much easier to drive, but it also runs out of breath sooner when pushed hard.

As a result, it was slower during our performance tests, particularly when accelerating from 50-70mph in sixth gear, where long ratios meant it fell 3.3 seconds behind. But in real world situations, it didn’t trail its rival by much, and since the turbo spools up so eagerly, at higher speeds it responds more effortlessly than the Octavia. It’s also quieter in terms of road and engine noise, and despite the sports suspension, it is extremely relaxed on the motorway. In fact, the Mondeo strikes a fine balance between ride comfort and sporty handling, thanks to its chassis. So when it comes to twisting roads, body control is good and the direct steering allows you to tackle bends with confidence. Once again, the ST has a more fluent approach than the vRS.

But where the Mondeo does fall down is on price. Although it comes well equipped with six airbags, cruise control, rain sensors and a multifunction steering wheel as standard, that’s not enough to justify the premium over the Skoda. Will this count against it in the final verdict?

Price: £22,995Model tested: Ford Mondeo ST TDCi 2.2 litre/153bhpChart position: 2WHY: The Mondeo has never been out of Britain’s top 10 best-selling cars since its launch in 1993. Now in its third generation, the performance ST variant was initially launched with a big 3.0-litre V6 engine, but Ford added this diesel option in 2005.

The Ford fared much better here – we were quoted £590 for the first three visits. However, the ST runs on a fixed 12,500-mile schedule and only has a single-year recovery deal.

Ford's popularity is its downfall when it comes to residuals. With so many around, second-hand values struggle, and the Mondeo is only worth 31.9 per cent of its list price after three years.

Our Mondeo was well run in, having covered over 9,000 miles, but only achieved 37.5mpg on our test route. That’s some way off the claimed figure of 46.3mpg. The range works out at 483 miles.