The Octavia's great value for your money and it comes in £4,000-odd less than the Mondeo 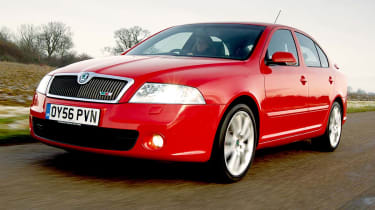 Described by Skoda as an ‘extra bit of car’, the Octavia vRS model is its most powerful road-going machine. Never­theless, the firm has always been keen to highlight its practicality and low running costs, too – after all, these are elements that have underpinned its success in the UK.

So adding a diesel engine to the vRS range makes a lot of sense. But you’d have to be a real Skoda fan to notice the external alterations. The only changes are the addition of a TDI badge to the bootlid and a switch from green to red for the brake calipers. That aside, the vRS TDI is identical, with the same deep bumpers, boot spoiler, twin exhaust pipes and alloy wheels. The sporty additions make the most of the standard Octavia’s sharp lines, though, giving the vRS an athletic look.

The cabin is quite conservative, with a three-spoke leather steering wheel, black roof lining and aluminium-effect trim on the centre console being the key differences from lesser models. We’d have liked Skoda to make it feel more special, but at least the black and grey sports seats lift the cabin with their green vRS badging. However, there’s no arguing with the Octavia’s practicality. There’s bags of storage up front – considerably more than in the Mondeo – thanks to deep door pockets, a large central bin and a dash-mounted cubbyhole. The boot is excellent, too, and although it can’t match the Ford for overall capacity, with the rear seats in place, it offers 60 litres more room. It’s a shame that the CD changer is mounted in the load bay, though – it seems a step back in time to locate it there, when both VW and Audi place changers in the glovebox or centre console. However, all-round build quality is good, and the Golf-sourced switchgear and robust plastics give the cabin an upmarket feel.

But the main talking point of the latest vRS model is the engine. It’s 230cc smaller than its Ford counterpart, but the 2.0-litre unit manages to deliver 168bhp, 15bhp more than the Mondeo’s TDCi. However, despite being a mainstay of the VW Group line-up, the TDI motor is not that refined – it’s noisy on start-up and diesel clatter is noticeable under acceleration.

And it’s also quite highly tuned, which means power delivery is not as linear and consistent as the Ford unit, making the Skoda a tricky car to drive smoothly at low speeds. However, on the motorway it’s excellent, and overtaking is a breeze. This was shown in our acceleration tests, with the Octavia sprinting from 30-70mph in 7.6 seconds, two seconds faster than the Ford. It was stronger in-gear, too – a surprise given its near identical kerbweight and 50Nm torque deficit. Riding 12mm lower than the standard Octavia and with the optional larger alloys, the vRS’s ride is firmer than the Mondeo’s, and it picks out potholes more easily. The Octavia is a little nose-heavy, too, but there is plenty of grip and the steering feels positive. Although it is noisier at speed and not as cosseting on the motorway, the Skoda is still dynamically very accomplished.

And at £18,370, it’s a massive £4,625 cheaper than the Mondeo, making it cracking value for money. The equipment list is competitive, too, and although curtain airbags are optional, it comes with ESP, climate control, a CD changer and sports seats as standard. Will this excellent value tip the balance in the vRS’s favour?

Price: £18,370Model tested: Skoda Octavia vRS TDI 2.0 litre/168bhpChart position: 1WHY: Until now, the vRS version of the Octavia has only been available with one engine, the excellent 200bhp 2.0-litre turbo petrol unit. The diesel carries an £845 premium over this, while an estate is available for another £850.

Our dealer phone round resulted in an average cost for the first three services of a massive £950. Although this is expensive, the vRS’s variable schedule means it should only need attention every 18,000 miles.

Skoda's image means used prices are strong. The vRS is the top performer in the Octavia range and the TDI will retain 46.1 per cent of its value. The petrol variant is even stronger, holding on to 47.8 per cent.

The vRS returned a decent 41.7mpg – around 10mpg better than we’ve had from the petrol version. So for long- distance drivers, the TDI makes a lot of sense. It also has an impressive range at 505 miles.

Emitting 157g/km of CO2, the Octavia is the more environmentally friendly car and sits one tax bracket beneath its rival. Its cheaper list price means that lower band owners will pay £849 a year.