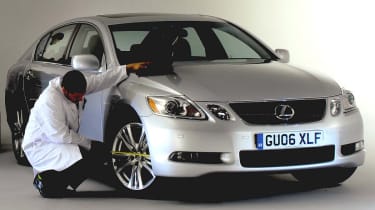 This car is aimed firmly at the likes of BMW and Mercedes. The high waistline and coupé-like profile echo the smaller IS, giving the saloon a more grown-up and sophisticated feel than the Legend. It’s just a shame it’s not more daring.

But with a 50mm longer wheelbase than the Honda, it’s quite a surprise that the boot is so much smaller – it’s down by 172 litres. The reason? Lexus has fitted 240 nickel hydride batteries directly above the rear axle to power the hybrid engine, and these eat into the loadspace. They also seem to have affected rear legroom – it’s not as generous as the Legend’s.

The driving environment is best described as conservative. It’s a simple layout, but we were disappointed to see Toyota switchgear on board – not good in a car costing more than £46,000.

Thankfully it’s all intuitive to use, and a lot less baffling than the Legend’s cabin, which like its rival features some dated wood-effect trim. The keyless entry system is useful – but the first time you press the engine start button can be a little unsettling, as there is no noise or vibration.

The hybrid system uses a standard 3.5-litre V6 VVT-i petrol engine which develops 292bhp, and this is mated to a permanent magnet electric motor generating 197bhp and 275Nm of torque from a standstill. The petrol engine and electric motor can power the rear wheels at the same time or, being a ‘full’ hybrid, the GS can also operate in pure electric mode. And because battery levels are constantly managed via the engine-drive generator, there is no need to recharge the system from an external source.

The result is an amazingly refined engine which offers awesome pace in an effortless fashion. The electronically controlled continuously variable transmission is another highlight – the stepless system maintains linear acceleration all the way up to the 155mph limiter. There’s no doubt that the technology works, and there are advantages besides an increase in fuel economy. For company car drivers, the GS450h is one of the most tax-efficient models in its class, while motorists in London will find the Lexus exempt from the congestion charge.

As with the Honda, the GS also features Adaptive Cruise Control (ACC) which works in the same way via a radar, but the system seems more sophisticated – the acceleration is smoother and braking less noticeable. But unlike its rival, the GS is also fitted with an Adaptive Variable Suspension system – this automatically adjusts damping force on all four wheels independently.

The system monitors a range of information such as engine revs, wheel speed and steering, continuously adjusting the damping of each shock absorber. However the big Lexus fidgets over bumpy roads, and feels a lot busier than its rival. It’s not uncomfortable, but we expected better.

The variable-ratio steering is well weighted, if lifeless, yet while the GS is quick, it’s no sports saloon. It feels bulky on the road and there’s considerable body roll in bends – sadly there are few thrills to be had, not least because the AVS stability system can’t be disengaged.

The Lexus is also expensive, at £46,808 for our SE-L, although prices start at £38,058. It may lack the lane departure warning system of the Honda, but other kit is comparable, plus the GS has 12 airbags compared to the Honda’s six.

The hybrid really only has economy advantages in town. On the open road, it’s comparable to a standard 3.5-litre engine. We averaged 26.7mpg, 10mpg down on the claimed figures.

The Lexus will drop an equally eye-watering £28,038 in three years. It has a slightly better residual value of 40.1 per cent, but a higher list price counts against it.

Lexus dealers topped our 2006 Driver Power survey, and the GS goes 500 miles further than the Legend before it needs attention. But the first three services are £790.