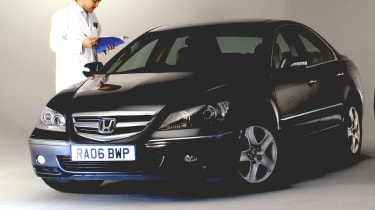 Enginering precision is Honda’s forte – it has clinched Formula One championships and developed powerful road engines. However, it’s often found wanting when it comes to styling and desirability.

Past Legends have failed to live up to their name, and although the firm claims the new model has a distinct personality, we’re not so sure – it looks like an overblown previous-generation Accord.

It hides its size well, though. At nearly five metres long, it’s 132mm larger than the Lexus, and despite its smaller wheelbase, has a bigger boot and better rear legroom.

Things start to get a little more interesting with the driving environment. The layout is more adventurous than the Lexus’, but despite Honda’s attempts to make the controls simple, there’s a lot going on and it’s button-heavy – there are 15 on the steering wheel alone, for instance! The sheer complexity of all the systems on board means it’s confusing at first.

But what’s instantly noticeable is the absence of some relatively common features, such as keyless starting or an electric handbrake – a convenience also missing from the GS. Once on the move, there are further criticisms. The all-aluminium 291bhp 3.5-litre VTEC engine may look good on paper, but in reality it’s quite lethargic. It has to be revved to get the best from it – maximum torque doesn’t peak until 5,000rpm.

But it’s not helped by the poor gearbox. There are large gaps between the five ratios, so it never feels that responsive. On the motorway these shortcomings are less noticeable, and the Legend is more at home. It’s also here Honda’s Advanced Driver Assist System (ADAS) comes into use.

Designed to help reduce fatigue and increase safety, it consists of two separate systems – Lane Keep Assist (LKAS) and Adaptive Cruise Control (ACC). The former uses a rear view mirror-mounted camera to monitor road markings on either side and applies enough input to the steering to help keep the car in its lane.

Honda states the system – which only works between 45 and 112mph – is not designed to drive for you. So if it fails to detect any hand pressure on the steering, it switches itself off.

And although it works, it’s not flawless. Our car had difficulty monitoring the white lines and would occasionally drift over them. What’s more, rather than tracking smoothly around gentle curves, the system tends to ‘bounce’, detecting a white line and turning back, but then straightening up too soon and correcting itself again.

The ACC is more successful. As with standard cruise control, it maintains a set speed, but it also uses a radar mounted behind the front badge to measure the distance to the vehicle ahead. It is then able to automatically hold a set gap behind it, braking and accelerating where necessary.

The system undoubtedly makes motorway driving less stressful, but It does have its limitations. On busy stretches where there is more lane swapping, for instance, sudden moves by other drivers cause it to brake quite sharply. And of course, unlike the human brain, it can’t predict movements before they happen.

The other tool in the Legend’s armoury is its Super Handling-All Wheel Drive (SH-AWD). This varies torque between each individual wheel and makes the Legend seem light, responsive and much more nimble than the GS. Even in tight bends it fills you with confidence. Sadly, the Legend doesn’t have the same sophisticated feel as its rival, but at £39,000 it’s £8,000 cheaper.

With a V6 engine, auto gearbox and four-wheel drive, it’s no surprise the Legend is thirsty. Over our test route, it returned 22.1mpg. It has a larger fuel tank than the Lexus, but a shorter 355-mile range.

As the Legend shows, non-German executive saloons fare badly on the used market. With a residual figure of 36.9 per cent, the Honda will lose £24,609 over three years.

Honda’s network is far larger than Lexus’ and it has a great record, coming second in our 2006 Driver Power dealer survey. The Legend is also cheaper to service, at £587 for three visits.

Emitting 273g/km of CO2, the Honda sits in the 35 per cent tax bracket, 11 per cent higher than the Lexus. That makes it expensive – high band taxpayers face an annual bill of £5,460.