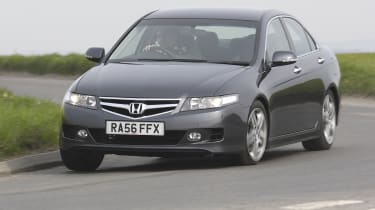 It wasn’t long ago that we rated the Accord as the best car in the family class. Then it was beaten in our group tests by the Passat. But could it be time for a comeback from the Japanese saloon? The Honda was facelifted last year, gaining new bumpers, wheel designs and colours, plus one or two cabin modifications. Although these are mostly minor cosmetic updates, the presence of a six-speed gearbox mated to the acclaimed i-CTDi engine is cause for celebration.

However, while the Accord still looks neat, with a sharp nose and crisp lines, the subtle external treatment fails to give the car more road presence. The bold new Civic proves that Honda isn’t afraid to take risks, so it’s a shame it didn’t try something more radical when it updated the saloon, too.

That applies inside as well as out. As with the Vectra, the Accord lacks the upmarket ambience, top-notch materials and attractive detailing which make both the Mondeo and Passat cabins so successful. In terms of layout and user-friendliness, it’s way ahead of the Vauxhall, though. The controls all fall perfectly to hand, the steering column has plenty of adjustment and the wide, comfortable seats give good support.

True, the interior is rather dark and some of the plastics are a touch brittle and flimsy, but – this being a Honda – it still manages to feel well constructed. However, the Accord is not large.

It’s the lowest and narrowest car here, the rear is relatively cramped and the 459-litre boot is modest, with a narrow through-load opening when the back seats are folded. In addition, the luggage bay is trimmed with cheap, thin carpet and has more exposed metal than any rival.

That’s odd, considering Honda claims to have fitted extra sound-deadening in the doors and boot. Clearly no further insulation was deemed necessary for the engine. From outside, it was the quietest by three decibels, and although that advantage slipped to a single decibel inside at idle, the Honda’s 2.2-litre motor remains the benchmark for smoothness and noise suppression.

You can still tell it’s a diesel at start-up, but once underway, the unit is ultra-smooth and responsive, with superb all-round acceleration. This is helped by the fact that the car weighs less than most of its competitors here, and boasts 20Nm more torque than any of them.

As with all these oil-burners, most action occurs below 4,000rpm, and the light, precise gearbox encourages you to make frequent shifts. It has the best operation of our quartet, while the throttle is positive and the hydraulic steering accurate. And it’s not only these advantages which make the Accord effortlessly easy to drive. That relatively small body helps keep the car nimble, and as it’s 126mm narrower than the Mondeo, it is very easy to place on the road.

Add in the taut suspension and you have a vehicle that is really enjoyable to drive. Unfortunately, the Honda does not have the Ford’s excellent road manners, nor such absorbent suspension. What’s more, the four-year-old Accord’s refinement has fallen behind that of rivals; we could hear wind whistle from the B-pillars and road noise in the rear cabin.

Age also means the Accord has lost ground in terms of equipment. The Sport model we tested is the lower of the two diesel trims, and lacks heated seats, xenon lights, an auto gearbox or MP3 player input. Still, temptingly low ownership costs should help keep the Honda in the running.

Price: £19,350Model tested: Honda Accord 2.2 i-CTDi SportChart position: 3WHY: Facelifted last year, the Accord added a six-speed gearbox to its superb diesel engine.

Our economy champ is light, with class-leading aerodynamics. We regularly saw 50mpg from the trip computer, proving just how good the 2.2-litre diesel still is.

Holding on to 48.3 per cent of its value means the Accord loses nearly £2,200 less than the Ford. This gives it running costs of only 45.9ppm – the lowest on test.

Planning on keeping your Accord? Buy Fixed Price Servicing: it’s £500, rather than £948 combined. Honda has the best warranty, but short 12,500-mile service intervals.

As with economy, the Accord is unbeatable here: 145g/km of CO2 means it’s taxed at 19 per cent, one per cent above the lowest bracket. In this test, there’s no cheaper option.