Bigger and bolder than ever, is the Mondeo the new class leader? 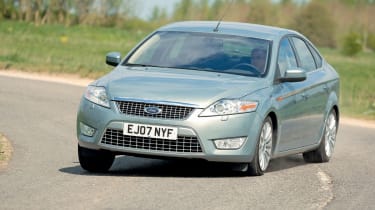 Will the new Mondeo change your perception of Ford’s family car? That’s the stated aim of the firm’s top brass. The blue oval is pulling no punches – increased desirability has been at the core of the new car’s development, and the Passat is the rival it has in its sights. It’s certainly more dramatic to look at than the VW saloon, although the ‘Kinetic Design’ styling that has attracted so much attention isn’t as cutting-edge in reality as we expected. Overall, we think it comes across as slightly fussy.

Instead of taking a less-is-more approach, Ford has gone overboard with the detailing, the end result being a car that appears as if it’s wearing too much make-up. As with the Focus CC we tested recently, it looks rather American, with excessive chrome brightwork around the nose, although the tail is tidy and the deep flanks help to convey a sense of solidity.

Executive director of design Martin Smith says he wanted people to be impressed when they saw the new Mondeo, but the main thing they’re going to be struck by is the size. It’s huge – wider and taller than a BMW 5-Series and only 60mm shorter.

At least no rival can match the Ford for space or versatility inside. Its load bay is cavernous and the rear cabin palatial. The interior itself is sporting and futuristic, characterised by swept-back A-pillars and shallow angles. So far, so good, then.

But once you have opened the heavy doors and settled into the equally spacious driving environment, you realise that up close the news isn’t entirely positive. Once again Ford has overdone the glitz, and while concentrating on that, some things have slipped through the net.

The speedo increments are hard to read, the leather wheel isn’t as pleasing to hold as the VW’s – although the surprisingly thin rim is beautifully shaped – the seat doesn’t adjust low enough, stowage isn’t as well organised on the transmission tunnel, and overall it doesn’t quite give off the Passat’s impression of quality. But these are mostly minor niggles, and in general the Mondeo’s cockpit is a great place to spend time – it’s a country mile ahead of the Vectra’s and Accord’s.

However the 2.0 TDCi engine doesn’t pack as big a punch. This is mainly due to the Ford’s hefty 1,615kg weight. The power and torque outputs are competitive, not least because the Ford has a 340Nm overboost facility, helping to ensure good in-gear pace. But it doesn’t have such a meaty mid-range as the Vectra or the Accord’s silky responses. Nor is the four-cylinder unit the last word in smoothness or noise suppression – it was the loudest at idle inside. Once on the move, the engine intrusion is only noticeable because there is barely a trace of wind or road noise.

All-round refinement is definitely a Mondeo strong point – no rival cruises as comfortably at high speeds or deals with coarse surfaces so well. It even delivers a cosseting ride around town. The optional £650 Interactive Vehicle Dynamics Control (IVDC) electronic dampers fitted to our car proved extremely adept, although we have yet to drive a Mondeo without them to report on what difference they make.

In short, the IVDC-equipped car feels unflappable thanks to its awesome suspension control, which in turn inspires confidence. And with a body that’s now 130 per cent stiffer and track width increased by 70mm, the Mondeo’s ability to entertain isn’t in doubt. It slices through corners, the steering is light yet extremely accurate, and unlike the Passat and Vectra, it never feels heavy or cumbersome – quite an achievement, given its kerbweight. So on the one hand the Mondeo is great at distancing you from the world outside, yet when you want to be involved, it’s ready for action. Further positives include a slick gearchange and strong, responsive brakes.

But there is one major negative. The car’s sheer width means it’s hard to avoid thumping cat’s eyes with your right-hand wheels. In terms of pricing and kit, the Mondeo is competitive without offering anything radically different or individual. We haven’t got a final idea of all the running costs yet, but a lowly group eight insurance rating bodes well.

Due to its heavy kerbweight, the Mondeo failed to top 40mpg over the course of three tankfuls. At least the big fuel reservoir puts 600 miles between stops.

Bosses won’t like this! Glass’s Guide says the Mondeo will retain 37.9 per cent after three years: better than the Vectra by five per cent, but also 10 per cent down on the Accord.

There may be close to 800 UK Ford dealers, but none has finalised its servicing deals. We expect highly competitive pricing – running costs of 48.3ppm suggest as much.

The Mondeo’s emissions aren’t as radical as its looks: it puts out 156g/km and so is taxed at 21 per cent, making it more costly to run than the Honda or Vauxhall.