Always popular, the Vectra will be a hard act to beat in the sales charts 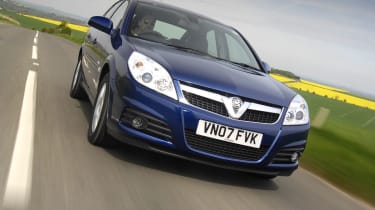 The demise of the family car has long been predicted. But since Vauxhall managed to shift 49,000 Vectras in the UK last year, it’s safe to say that view could be a little premature.

But will the new Mondeo hasten the Vectra’s tumble down the popularity chart? Given Ford’s reinterpretation of the family car, anonymity is now the Vectra’s biggest enemy. Although facelifted with a sharper front end 18 months ago, it remains an unimaginative car – both inside and out.

For starters, the cabin is overwhelmingly grey, the design is plain and slabby, and there’s no sense of style. This would be forgivable if the layout and ergonomics were excellent – but they aren’t. The controls are spongy, stowage space isn’t great (the door pockets are too narrow and the twin cupholders are pointlessly shallow), and driver comfort lags behind all rivals here. While the firm seat offers good lumbar support, it lacks side bolstering, and the steering wheel isn’t as widely adjustable or good to hold as the Ford’s.

The Vectra does come across as robust, but that alone does not make the charmless cabin a pleasant place to spend time. Nor is the rear environment any better – you sit low, and while headroom is good, leg space lags 55mm behind the Mondeo’s. The boot is better – open the hatch and the 500-litre bay looks huge compared with that in either saloon. In reality, the dimensions are smaller, but its square shape and easy loading make it very practical. There’s also a huge cubby built into the right-hand side.

The Vectra can’t offer such generous interior space as the Mondeo. It’s now a relatively old car, and Ford has really moved the game on in terms of size, space, design and quality. The Vauxhall is more than 150mm shorter and nearly 100mm narrower than its rival. Luton’s contender has the smallest engine, too. But the 1.9-litre common rail diesel knows how to pack a punch – not even the 2.2-litre Accord can match its 148bhp. The pick of a seven-strong engine range, it’s a touch gruff at low revs and starts to lose its composure up towards the 5,000rpm red line. Yet in the thick of the powerband, the well insulated unit is strong and sweet, with good pick-up. It’s only a shame the disappointing gearchange isn’t more precise.

But then, neither is the handling. After experiencing the Mondeo, the Vectra feels clumsy. Its chassis responses are dull, there’s less interaction and, with too much bounce and uncontrolled movement, the suspension doesn’t settle in corners. In fact, it’s on the verge of being wallowy, which doesn’t inspire confidence. Opting for sportier SRi trim, with its lowered suspension and 17-inch alloys, would improve poise and control. Yet, as the car’s literature states: “Vectra drivers… prize refinement above all else.”

The soft set-up does deliver great ride comfort, though, and takes the sting out of motorway trips and urban potholes with equal competence. And even if there’s too much vertical spring travel on bumpy roads, the Vectra never loses its sense of refinement – its 68 decibel noise reading at 70mph matched the Mondeo’s.

Overall, though, the mundane and ordinary Vectra simply doesn’t come across as offering good value for money. A quick trawl of the Internet revealed that it’s possible to save more than £2,000 on the £19,910 list price, but even then, it’s not a car that instils pride of ownership.

Price: £19,910Model tested: Vauxhall Vectra 1.9 CDTI DesignChart position: 4WHY: The only car to offer as wide a range as the Mondeo, the Vectra is a major fleet sales rival.

The consistently undesirable Vectra has a dismal 32.7 per cent residual. This also drives up the contract hire costs – it is more expensive than both the Passat and the Accord.

To retain its mass-market appeal, Vauxhall keeps servicing modest: only £539 for three years or 60,000 miles. Yet, as with the VW and Ford, it has only a one-year recovery deal.

It may not be able to match the Accord, but by emitting 2g/km less CO2 than the Mondeo, the Vectra drops into the 20 per cent band and so is slightly cheaper.