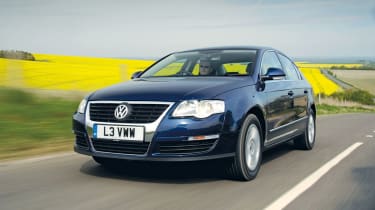 The Mondeo is able to trace its lineage back to 1993 – or 1962, if you include its Cortina and Sierra predecessors – but there has been an uninterrupted series of Passats for nearly 35 years. Now in its sixth incarnation, the German saloon has built up a well deserved reputation for quality and status.

That’s the case now more than ever before. The latest version is tough (it has a five-star Euro NCAP crash test rating, one more than both the Vectra and Accord), while the clean, simple styling and bold badges convey an upmarket air. The shape isn’t that dramatic or dynamic, but the detailing, especially the jewel-like rear light clusters and chrome window surrounds, help to perk the Volkswagen up.

The fact the Passat isn’t available as a hatchback doesn’t seem to have dented sales, either – 23,000 saloons were shifted in the UK last year. It does mean practicality suffers, but not by as much as you might think. Split-fold rear seats are standard across the range, enhancing the versatility of the 461-litre boot (reduced from 485 litres by our car’s four-wheel-drive transmission). The floor area is greater than in any rival, and passenger accommodation is generous, too, with 770mm of rear legroom. It’s not quite as spacious as the Ford, but then the VW has the smaller external dimensions.

There’s plenty of room for the driver as well. Sculpted doors increase elbow clearance, the range of adjustment in the seat and steering column is unbeatable, and although the soft chairs aren’t the last word in lateral support, you soon come to appreciate the deep padding on longer journeys.

The attention to detail inside is superb, too, with controls that are logically laid out and easy to use, a steering wheel that’s great to hold and a useful central digital display.

Overall the Passat has a simpler, less glitzy interior than the Mondeo; the chrome highlights are more subtle and the cabin is more tasteful. This is a family car that’s a match for most compact executive saloons in that regard.

The same can’t be said of the engine. We have criticised VW’s 2.0-litre TDI unit in the past for being rather rough and ready – but at least it’s well insulated in the Passat, and is even better in 4Motion guise. Power delivery is still quite sudden in the short first and second gears, making for abrupt progress around town, but in other ratios it feels smoother because of the lack of outright performance. The four-wheel-drive model’s 30-70mph time of 10.9 seconds was 1.5 seconds slower than the front-wheel-drive Passat, while an economy figure of 42.8mpg on the combined cycle is 6mpg poorer.

But don’t dismiss the Passat 4Motion just yet, because the addition of driven rear wheels has improved the car’s weight distribution – the result being a better handling balance and superior traction. It’s less nose-heavy, has grippy turn-in and basically feels more positive to drive than the standard car.

The vague brakes aren’t as good to use as the Mondeo’s, though, and the suspension isn’t as well controlled. This takes the edge off ride comfort, but refinement remains a strong point – no car was quieter when cruising at 70mph. Yet perhaps best of all, the Passat looks, feels and acts like a more expensive car than the price tag suggests. The new Mondeo has its work cut out.

We’ve usually found the 2.0 TDI to be thrifty. But with 4Motion, returns dropped by at least 5mpg to 36.8mpg – the worst here – and reached 32mpg with hard driving.

A 43.5 per cent residual isn’t bad, but despite VW’s premium image, the Passat lags five per cent behind the Accord. The two-wheel-drive model holds on to 45 per cent.

VW says its diesels can travel up to 30,000 miles with Longlife – although dealers we spoke to said 20,000 is more typical. However, £930 for three services is not cheap.

The 4WD system drives emissions up by 21g/km, so the car sits four tax bands higher and costs £1,067 annually, rather than £834 for its front-drive stablemate.