Is there substance to the new-found style of the latest C-Class? 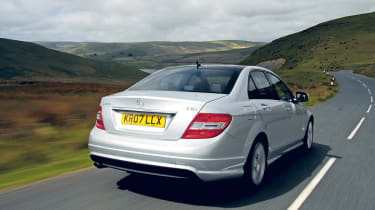 In developing the new C-Class, Mercedes crashed 100 cars to test safety and impact protection. Excessive? Not when you consider that it sold 1.4 million of the last-generation model over eight years. It’s the firm’s biggest seller – no mean feat, since Mercedes has a wider and more varied range than any other manufacturer. With so many sales at stake, getting the newcomer’s look right was crucial. Since last year’s S-Class heralded a new design direction for the brand, it’s no surprise that the C-Class apes its chunky lines and big wheelarches. We think it’s a successful update, not least because it makes the compact exec look less conservative than its predecessor. That’s especially true in the Sport trim of our test car, which has a bolder grille and lowered suspension.

Predictably, the C-Class is bigger than before, and it has an identical wheelbase to the BMW. That means interior room is similar to its rival’s – there’s enough head and leg space for the outer rear seat passengers, but the transmission tunnel doesn’t leave much foot room in the middle.

The C-Class also has the biggest boot, at 475 litres. All three German contenders are closely matched for practicality, though, and you have to pay extra for folding rear seats in each. The Merc has the most generous cabin environment up front, with plenty of adjustment on the wheel and seat.

The dash layout is clear, simple and modern, while the design is appealing. But the C220 doesn’t have the same solid feel as the 3-Series or A4, and in terms of quality and materials is closer to the B-Class hatch than the E-Class executive. Given that it costs close to £30,000, it doesn’t feel special enough.

There are other annoyances, too. The foot-operated parking brake is old-fashioned and a pain to use with a manual transmission, since you have to deal with four pedals in the footwell. The manual gearlever is cheap and resonates under acceleration. Combined with a slack shift action, it falls short of the mechanical excellence you’d expect from a sporting saloon. A springy clutch and a throttle pedal with a lazy response also numb the driving experience. However, the 2.2-litre diesel redresses the balance – it’s potent, smooth and very hushed, delivering its power in a relaxed yet sporty manner. It pulls well, too. A 60Nm torque advantage means it’s keener than the BMW and was more than 1.5 seconds quicker than any rival from 50-70mph in sixth.

What’s more, with low noise readings and less engine intrusion than the BMW, the CDI is easily the most refined of this quartet. That sensation of comfort continues with well suppressed road and wind noise, but it’s the ride quality that stands out.

Mercedes has made the C-Class 13 per cent stiffer than before and fitted it as standard with Agility Control, which automatically alters damper response to match road conditions and cornering force. The end result is that the C-Class blends excellent body control and stability in bends with a supple ride. Its composure boosts confidence, and while the steering isn’t quite as sharp as the BMW’s, overall it feels the better package.

The C220 CDI Sport is the most expensive car here, and although the 320d M Sport isn’t much cheaper, the C-Class lacks standard parking sensors and cruise control. Nevertheless, while patchy in some areas, the Mercedes has the beating of the BMW in others. Will it triumph overall?

Chart position: 2WHY: With a more youthful image than ever, the new C-Class promises refinement and dynamic prowess.