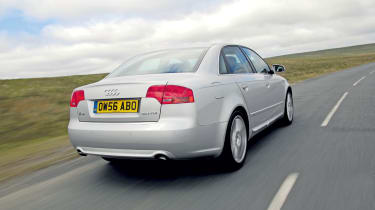 With its understated image and reputation for quality, the Audi A4 is a rival that the C-Class can’t ignore. Its clean, simple and well executed styling has won it many fans, and the sporty S line modifications have been nicely blended in – it doesn’t look as brash as the Mercedes or BMW.

But it still boasts 18-inch alloy wheels and subtle extra body mouldings to stand out from lesser A4s. It’s longer than both German rivals, yet has a shorter wheelbase, but despite that manages to offer comparable interior space. The 460-litre boot is a match for the 3-Series for luggage capacity, and although rear legroom isn’t quite as good, four adults will still fit in comfortably.

The driving environment is nearly as roomy as the C-Class’s, and the switchgear has a simple layout, which, combined with clear dials, good visibility and superb build quality, makes the A4’s cabin great to live with.

The driving position is set slightly higher than all rivals except the Alfa’s, and under-thigh support is lacking. Further drawbacks include the long-travel clutch and the manual gearbox, which hasn’t got the slickest of shifts. The transmission does feel more mechanically robust than the six-speed unit in the C-Class, however.

Unsurprisingly, the front-wheel-drive Audi relies on its traction control to contain its torque more than its rear-driven rivals do. The electronics are forced into action quite regularly, due to the 2.0 TDI’s sudden power delivery at low revs. Although this punchy, surging habit means the A4 isn’t particularly easy to drive smoothly around town, in-gear performance is strong.

The Audi’s 350Nm of torque meant it out-accelerated the BMW in all our tests, and it delivers rapid overtaking on the road.

However, it falls down slightly when it comes to refinement. The A4 is noisier than its German rivals at both 30mph and 70mph, and the TDI can’t match them when it comes to suppressing engine noise. It’s louder at the motorway limit, for example, and as a result isn’t as cosseting on long trips as the C-Class.

Keen drivers won’t get a huge amount of satisfaction from the Audi’s driving experience, either. The A4 isn’t as crisp and communicative as the BMW, and the chassis lacks the composed nature of the Mercedes’, too. There’s more suspension travel and it isn’t as tightly damped as either German opponent, so the A4 can get fidgety. And under cornering loads, there’s some kickback to be felt through the wheel.

However, the A4 has fluid steering, safe handling and is certainly easy to drive. It’s fine in most situations, but it doesn’t feel as responsive as its newer rivals when you demand that little bit extra from it.

Nevertheless, the Audi is still a desirable car. At £24,415, the S line is notably cheaper than the Mercedes or BMW. However, there’s no automatic gearbox option with the 168bhp TDI engine, but you can upgrade to the sure-footed quattro four-wheel-drive version for an extra £1,425. Impressively strong residuals add to the Audi’s ownership appeal, and with the next-generation A4 at least 18 months away, it’s clear that the current car still has much to offer.

Chart position: 3WHY: No car in the compact executive class is better built. Little wonder A4 sales have risen this year.