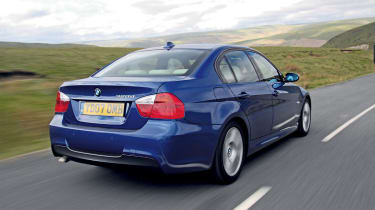 With its decision to offer a more sportily styled version of the new C-Class, Mercedes clearly had one car in its sights – the BMW 3-Series. The benchmark for handling involvement in this sector, in M Sport trim it features a racy look to match its driving experience. Our test car’s Le Mans blue looks great, and together with the bodywork additions, adds yet more visual impact to the standard car’s otherwise familiar styling. In ‘normal’ spec, the 3-Series doesn’t have as much presence as the Mercedes, plus it’s shorter and appears more compact, thanks to its minimal overhangs.

Once inside, the identical wheelbase lengths for both cars mean cabin room is very similar, and each offers comparable rear passenger space. Up front is typical 3-Series, though, with plenty of wheel and seat adjustment making for a great driving position – offset pedals aside.

That impression is enhanced by the way the dash layout is focused around the driver. Simple audio and climate controls sit in the centre, while the standard multifunction wheel has buttons for the radio and optional Bluetooth wireless phone connection.

A stubby gearlever and thick-rimmed steering wheel (which is arguably too chunky to grip easily) mark out the M Sport. And although our car was fitted with £995 Dakota leather, even without this, the BMW’s cabin comes across as being a little better thought out and more solidly built than the C-Class’s.

But it’s the driving experience and engines that have always made the BMW 3-Series a class leader. While the 320d has the least power and torque of our quartet, the engine is very well mannered, with no sudden turbo surge. Power arrives steadily right through the rev range. The 320d also has a sharp throttle response, plus the strongest and most communicative brakes in this test.

These predictable controls make it easier to drive around town than the C220, while on more open country roads the steering is sharper than on any of its rivals. The BMW turns in with an accuracy and level of feedback that its opponents struggle to match. There’s plenty of grip, too, and thanks to the rear-wheel-drive layout, traction is superb.

On UK roads, the 3-Series isn’t at its best in M Sport trim due to the firmness of the ride, which means that it jumps and fidgets over bumps that don’t trouble the C-Class. The 320d simply doesn’t come across as being that relaxing to drive, and so proves more tiring on long trips.

Overall, the BMW’s chassis lacks the composure of the Mercedes’, while on the motorway it can’t match its refinement. However, our noise figures prove the BMW is just as quiet at 30mph and 70mph. Nevertheless, if it was our money, we’d opt for the SE spec with its more absorbent suspension – it strikes a better balance between comfort and entertainment than this more aggressive M Sport set-up.

When it comes to equipment, the 3-Series features cruise control and parking sensors as standard – only the Alfa Romeo can match it, as they’re options on the Audi and Mercedes. However, part-electrically adjustable seats are standard on the C-Class, and the 320d is more expensive than the Audi. Fixed-price servicing and good residuals hand some advantage back to the BMW, though.

Chart position: 1WHY: While the 3’s handling and engines are renowned, it’s also very cost effective and well packaged.