It has the looks to beat the Germans, but does it have the quality? 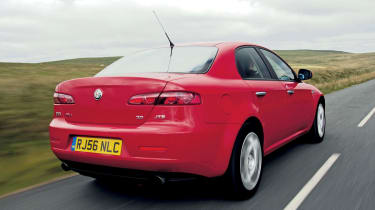 In a class totally dominated by efficient and predictable German designs, the passionate Alfa Romeo 159 is a breath of fresh air. The fact it looks good has never been in doubt – but it’s the less tangible aspects that have tended to let the marque down in the past.

Yet it’s pretty hard not to be completely captivated by the 159’s visual impact. The hooded lights are only one element that makes the Italian saloon so individual – it’s a compact executive that doesn’t follow the crowd.

This extends to the car’s dimensions. It’s a significantly bigger machine than its rivals, nearly 100mm longer than anything else here, plus it’s lower and wider, too. No wonder the Alfa looks so athletic. But given its size, why does it have such a small boot and paltry rear legroom?

This is a question we’d like to put to thefirm’s packaging experts. However, the fact it has long overhangs and a shorter wheelbase than either the Mercedes or BMW goes some way to explaining why things are so tight.

The narrow load bay opening further hinders practicality, but then cabin space is unlikely to be a fundamental criteria if you’re buying in this market. Having a robust, ergonomically friendly and attractive driving environment is much more important.

The Alfa fares well in two of the three areas – it’s an inviting place to spend time, and most of the dials and switches are well positioned. But although Alfa’s quality has certainly improved markedly in recent years, the cockpit still doesn’t feel like it will be able to match the durability of the German cars’. It’s also a little lacking in terms of comfort and cubby space, too. But with prominent Italian labelling positioned around the cabin, you are never allowed to forget the nationality of the car you’re sitting in.

Even the 2.4-litre diesel seems to have real verve and passion. But then it does employ a larger capacity five-cylinder unit, which musters 30bhp more than any of its rivals.

However, the Alfa wasn’t that much faster in our performance tests – it was hampered by a heavy kerbweight, long gearing and a notchy shift. Out on the road, it’s more muscular and impressive, but the penalty for gaining an extra cylinder is a significantly heavier appetite for fuel and higher CO2 emissions than any of its rivals.

There is a more efficient 1.9 JTD 150, and between them the two engines account for 75 per cent of 159 sales – an even higher proportion than is typical with the German firms.

We used a 3.2-litre V6 model for our pictures, and while the petrol unit undoubtedly suited the 159 better than the diesel we’d driven previously, there’s not much to choose between them when it comes down to overall road manners.

The front-wheel-drive Alfa is characterful and fun, which immediately gives it a distinct advantage over the Audi. But it’s simply not as capable as the two rear-drive cars in our test. While the 159 turns in sharply and the steering has good feedback, there are other significant weaknesses that the firm needs to address – in particular body control, ride comfort and noise insulation.

In its favour, even this top-spec Lusso model is the cheapest car here by more than £1,000, but the 159 demands too many compromises to appeal to a high percentage of buyers. It’s little wonder, then, that the 3-Series outsells the Alfa by a factor of 20 to one.

Chart position: 4WHY: The 159 is the most powerful car here, and the best equipped, too. Can it topple the Germans?