Can Mercedes all-new C-Class sink three of its key competitors from BMW, Audi and Alfa Romeo? 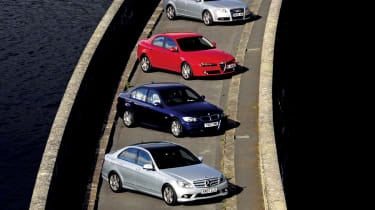 Let battle commence. Up for grabs is the title of world’s best compact executive car – an award BMW’s 3-Series has made its own since the launch of the current fifth generation in 2005.

But now there’s a newcomer on the scene, and the 3’s grip on the class crown is looking shaky. The latest Mercedes C-Class is forging a new path in a bid to boost sales and win plaudits. It’s offered in a choice of designs: standard (for SE and Elegance models), or this sharper-styled Sport with lowered suspension and more direct steering.

Here we feature what’s likely to be the top-selling model: the 170bhp C220 CDI. One thing hasn’t changed – Mercedes’ high prices – so if it is to narrow the sales gap to its BMW rival (14,536 C-Class saloons found homes here last year, to 30,471 examples of the 3-Series), it will need to be very good indeed. But then the 320d M Sport is only £427 cheaper than our test Mercedes – although the BMW provides crisp dynamics and top-notch quality and desirability.

As does the Audi A4. It’s lost to the 3 before, yet isn’t here to make up the numbers – our car uses the latest 168bhp 2.0 TDI engine, and in S line guise it’s keenly priced.

Waiting in the wings to snap up buyers with an eye for style, value and individuality is the Alfa Romeo 159 2.4 JTD. Only one car can win. Which will it be?

This test also premieres our new green rating, a measure of a car’s environmental credentials. We hope you find it useful...

The BMW 320d wins this test. That’s the headline, but it doesn’t tell the whole story. With the new C-Class, Mercedes comes very close to toppling its biggest rival. The Sport-spec C220 CDI is better overall to drive than the M Sport BMW, plus is more refined and attractive, faster and only costs a little more.

Yet it’s let down by a series of niggles. Undermining its appeal are the foot-operated handbrake, poor pedals, slack manual gearbox and, worst of all, an interior that features too much brittle plastic. Even though the BMW is hampered by a more jittery ride, it comes across as a more cohesive car.

Together, the top two are comfortably ahead of the Audi and Alfa. While the A4 gets so much right, it suffers from a coarse TDI diesel engine, fidgety ride and less talented dynamics. As for the 159, it’s great value and very exclusive, but isn’t a polished enough performer in this company.