It’s grown in size, but has MINI lost its sporting edge in the process? 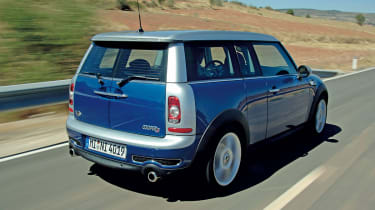 From the front it’s standard MINI, while only the eagle-eyed will spot the integrated roof rails. Yet the elongated glass area hints that this is no ordinary version, and it’s at the back where the influence of past models has had a real impact.

The van-style double doors – which featured on the original estates – are unique in this sector, and we think they really stand out. The same could be said of the silver C-pillars which extend to the bumper (as with the roof, these can also be specified in black). Pull the stylish chrome handles, and you’ll find that the doors open with minimal effort, thanks to gas struts – although you have to open the right hand door first, which can be a pain.

The boot itself isn’t particularly impressive, either. Compared to the standard car, there’s an extra 100 litres of space, and there is also another 50-litre area under the floor. However, an overall capacity of 260 litres is still 90 litres smaller than the Golf. There’s better news for passengers, though. The rear chairs offer decent legroom compared to the hatch, although it’s still not that spacious. In relation to the GTI, it feels a little cramped, but the optional leather seats of our test car were extremely comfortable.

While the chairs are good, access isn’t. The rear-hinged Clubdoor is certainly an unusual addition that helps the MINI to retain its clean lines, but unlike on our left-hand-drive test car, it will be on the ‘wrong’ side on UK models, so passengers will have to step into the road to make use of its wider opening. It doesn’t make entry or exit particularly easy, either, especially as the front seatbelt is attached to it and gets in the way. You can still get into the back from the single door on the opposite side without too much of a struggle, though.

Interior quality is excellent and the driving position spot on. It certainly feels more special than the GTI, so it’s a bit of a letdown that the engine has such a muted note on start-up.

You’ll quickly forget this once on the move. The 1.6-litre turbo unit, co-developed with PSA Peugeot Citroen, is eager and free-revving. The turbo picks up from 1,500rpm and the unit is incredibly responsive, although it lacks the top-end rush of the GTI’s motor. As with all new MINIs, it comes with Auto Start/Stop to help reduce emissions. This can be disconcerting at first, but makes a lot of sense in traffic.

At the test track, the MINI matched the more powerful Golf’s 0-60mph time of 6.8 seconds and was slightly quicker from 30-70mph through the gears. But this is only half the story. On the road, the MINI is more engaging and agile than the VW.

From behind the wheel, the Clubman feels much like the standard Cooper S, although the extra 80kg kerbweight is noticeable during quick changes of direction or under hard braking. Our test car was fitted with an optional £115 limited-slip differential, which meant traction out of tight bends was impressive. And while the Golf is more sure-footed, the MINI has the edge for involvement.

On paper, the Clubman seems good value compared to the GTI. But equipment is miserly – despite costing more than £17,000, the Cooper S doesn’t even get air-con. Yet with all the options fitted to our car, it still worked out significantly cheaper than the Golf.

Price: £17,210Model tested: MINI Cooper S ClubmanChart position: 1WHY: The Clubman has a longer wheelbase than the hatch and gets an extra side door to boost access.

The Cooper S hatch was the most frugal sporting car in our economy test in (Issue 964) with a figure of 33.5mpg. The Clubman fares even better, thanks to its Auto Start/Stop technology, giving 34.5mpg.

Our experts have yet to calculate resale values for the Clubman, but it’s sure to be a strong performer. The standard MINI Cooper S retains 57.3 per cent – among the best of any hot hatch.

MINI’s excellent tlc package is possibly the best around. For only £150, buyers get servicing for five years or 50,000 miles. And it can be transferred, which helps the car’s residuals.

The smaller 1.6-litre engine means the MINI is the cleaner car; it emits 150g/km of CO2. Add in a cheaper sticker price, and lower-band owners face annual tax bills of £644.