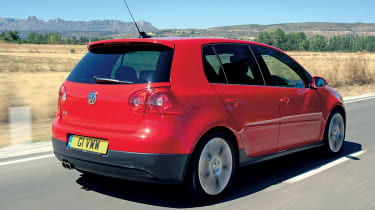 With so many potential rivals for the new MINI, picking one that best matched the Clubman was tricky. So why the GTI? Well, as with its rival, it has a sporting ethos combined with practicality, especially in five-door guise.

However, the extra doors don’t do much for the looks. We’re big fans of the stylish three-door, but this variant doesn’t work quite as well, and seems a little fussy. It’s still every inch the hot hatch though, thanks to the aggressive nose, side skirts and tailgate spoiler. Parked alongside the Clubman, its extra height and width are clear to see, and it certainly looks more the performance car.

So what about the GTI’s practical side? Well, there’s nothing particularly clever about the Golf’s boot with its top-hinged tailgate, but that doesn’t really matter, as the load space is longer and wider than the Clubman’s. That’s no surprise, given the car’s 258mm overall length advantage. Not only is the boot bigger with the seats up, but drop them down and the GTI has an impressive 1,305-litre capacity – 375 litres more than the MINI.

If you regularly carry more than one passenger, or have children, then the Golf makes even more sense. With conventional rear doors, access is straightforward – crucial if you are fitting child seats – while passenger space is much bigger. Legroom is generous (720mm compared to 660mm in the Clubman) and it’s more comfortable with three in the back, thanks to the extra width.

The rest of the cabin has a real air of solidity. It lacks the neat styling touches of the retro-inspired MINI, but in its own sober way the VW has a pleasing and upmarket ambience about it. The driving position is just as good as the Clubman’s, and the seat and column have more adjustment.

As with the Cooper S, the GTI uses turbocharging to deliver its 197bhp and 280Nm of torque. The TFSI motor feels smoother than its rival’s and was quieter at idle, too. Like the MINI, there’s nothing distinctive about the engine note at start-up, but on the road, a blip of the throttle and quick lift are accompanied by a pleasing rasp from the exhaust.

During our performance tests, the Golf matched the lighter MINI’s 0-60mph time of 6.8 seconds, but was surprisingly slower from 50-70mph in both fifth and sixth gears, despite its more aerodynamic shape.

Another letdown is the optional DSG gearbox. While the transmission works well on large executive cars, it’s not suited to a hot hatch. Even with steering wheel-mounted paddleshifters, it can’t replicate the involvement offered by a manual box and saps the fun out of the driving experience. Progress is still rapid though, and overtaking is a breeze, but with virtually undetectable gearchanges, the GTI never seems as fast as the figures suggest.

This doesn’t prevent the VW from feeling composed and dependable on tight, twisting roads. Yet while it’s well balanced and precise, the Golf never engages with you the way that the MINI does. Don’t get us wrong, it’s talented, but it lacks the same fun factor of the Clubman. The ride quality is excellent though, and the cosseting Golf is a more relaxing long-distance companion.

But it doesn’t come cheap. Even without the DSG gearbox, the VW costs £21,107 – nearly £4,000 more than the Clubman. However, it does come with rain sensors and climate control as standard – both are on the long list of optional equipment available on the MINI.

Price: Price: £22,437Model tested: Volkswagen Golf GTI DSGChart position: 2WHY: The GTI is one of our favourite hot hatches, and the five-door adds versatility to its talents.

According to VW’s figures, the DSG gearbox boosts economy by 0.5mpg. We averaged 30.8mpg on test – 1.7mpg better than our figure for a manual.

VW’s image counts for a lot. Add in the GTI badge, and it’s no surprise the Golf retains 50.4 per cent of its price. This is no match for the MINI, but is still impressive.

Running a GTI is far from cheap compared to the Clubman. But VW fared better in our Driver Power 2007 dealer survey, coming 14th out of 32 – MINI was 26th.