Styling is controversial, but does new car live up to legend elsewhere? 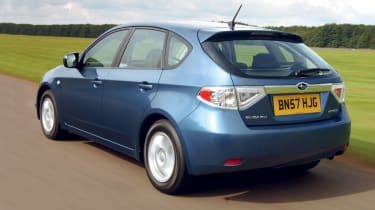 Variety is the spice of life – but during our two-day road test with the latest Impreza, we struggled to find anyone who liked its new image. Subaru bosses are describing the model as an ‘icon reborn’, and it is radically different from the boxy saloon it replaces. Yet it’s by no means handsome.

In fact, most people were convinced it was anything but a Subaru. It has none of the outgoing model’s aggression, and while that car’s design was fairly dated, it was at least recognisable, and had a distinctive Japanese character.

Admittedly, our entry-level 1.5 R isn’t the most flattering variant, with its 15-inch alloy wheels. The 2.0 RX models add spoilers, side skirts, a chrome exhaust and a rear diffuser which give a sportier image. Yet even these can’t disguise the fact the Impreza looks overweight and, if anything, anonymous. You only need to compare it with the likes of Honda’s Civic to see how a daring design can be successful – what a pity Subaru didn’t take inspiration from its Far Eastern neighbour.

The attempt to move upmarket has clearly fallen short – and it’s the same story inside. The materials feel cheap and the vast expanse of grey plastics is unappealing. Everything seems rather dated, and this isn’t helped by the old-fashioned column stalks and standard instrument dials.

Build quality is solid and the driving position decent, however. But compared with the Vauxhall and Mazda, passenger space in the rear is average and legroom is tight. The boot is also smaller.

Thankfully, things improve once on the move. Subarus are renowned for their keen handling and driver enjoyment and, although this Impreza is no performance machine, it’s dynamically strong.

The new model is shorter and wider than the previous Sport Wagon, although the wheelbase is 95mm longer. This combines with a lower-placed engine and transmission to keep body roll well in check, while the all-wheel drive grips impressively.

Sadly, the package is let down by the steering; not only is the set-up overly light, it’s also short on feel. The rack is quicker than before, and makes the Subaru manoeuvrable around town, but there’s precious little feedback. Still, the ride quality is impressive, though, thanks to the multi-link rear suspension. On rough surfaces, the Impreza is more supple than either rival.

The all-aluminium 1.5-litre boxer engine is carried over from the previous car, but has been adjusted to deliver marginally more power and improved economy. Yet it feels lacklustre, and needs to be worked hard – luckily, the five-speed manual gearbox is positive, and its revised ratios make motorway driving more refined.

At the test track, the Impreza posted the slowest times all-round. It covered 0-60mph in 12.9 seconds, while in-gear times were equally poor. The power-sapping four-wheel-drive system is to blame for this. Stopping performance wasn’t great, either, because the brake pedal was a bit spongy, and the Impreza took 53.8 metres to come to a standstill from 70mph – that’s at least three metres further than either rival.

The one big advantage the Subaru has in this test is its price. At £12,495, it’s £845 less than the 3 and more than £1,000 cheaper than the Astra. It comes generously equipped, too, with climate control, alloys and electric windows as standard. The question is whether that compensates for the Impreza’s shortcomings.

The Japanese firm’s boxer engines have never been renowned for their economy, especially when combined with all-wheel drive. The 1.5-litre powerplant in this new Impreza was the thirstiest in this test, returning only 28.7mpg in our hands.

Second-hand values for the new Impreza aren’t available yet. But, using the outgoing car’s 37.1 per cent figure as a guide, we think it’s unlikely the new Impreza will top 40 per cent, giving a value of around £5,000 after three years and 36,000 miles.

While Subaru hopes to broaden the Impreza’s appeal, servicing is still at performance car prices – the first three garage visits cost a hefty £950. Still, the firm’s network came a superb fifth out of 32 in our Driver Power 2007 dealer survey.

Although it has the smallest capacity, the Subaru engine emitted the most CO2 in this test, at 176g/km. That puts the Impreza in the 22 per cent tax bracket – so, despite its low price, it costs lower-band earners the most, at £605 a year.