When it comes to visual impact, few cars can match the Civic 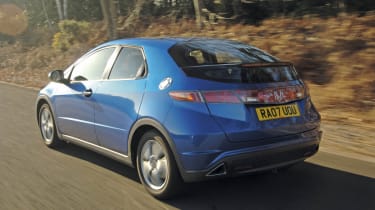 When it comes to visual impact, few cars can match the Civic. Even two years after its launch, the mould-breaking design still catches the eye. Thanks to the concealed rear door handles and rising waistline, it looks like a coupé, and is the sportiest of the four models on test.

The same stylish design makes its way into the superb cabin. The funky dash has a futuristic feel, while all of the controls, including the high-placed gearlever, are within easy reach of the steering wheel. Minor gripes include the driver’s seat being slightly too high, while rear visibility is hampered by the mid-level tailgate spoiler. But overall it’s an attractive, well thought-out interior.

It’s practical, too. The rear seats fold flat and the doors, although rather small, open wide to aid access. Once inside, it’s dark – the large C-pillars make you feel hemmed in, and headroom is a bit tight for tall passengers. Yet the Civic offers bags of legroom, while the boot is the largest on test, thanks in part to the extra underfloor storage.

There are no complaints about the engine. It’s the least powerful unit here, but is free revving and never becomes coarse. Despite being heavier than the more powerful 308, the Civic posted the best 0-60mph time, at 8.5 seconds, plus it was the most economical and has the lowest emissions.

In terms of handling, there’s little to choose between the Honda and Ford. Both are incredibly composed and enjoyable, whether eating up motorway miles or tackling country lanes.

Our mid-spec Civic ES is practically the same price as the Focus, but it comes slightly better equipped, with climate control, rain-sensing wipers and cruise control all standard.

Price: £16,330Model tested: Honda Civic 1.8 ESChart position: 1WHY: Thanks to its excellent dynamics and practical interior, the Civic is our current class champ.

AS the Civic proves, Honda’s i-VTEC units are highly efficient. We achieved 36.5mpg. Yet the 50-litre tank means it has the shortest range, at 401 miles.

Need more persuasion to buy a Honda? The Civic retains 50.6 per cent of its original cost, meaning it loses £2,785 less than the Focus over three years.

Honda could teach its rivals a thing or two about service. It came home in a superb second in the Driver Power dealer poll. Three services on the Civic cost £560.