Designed to blend the agility and comfort of a hatchback with the strength and practicality of an SUV, the Qashqai is Nissan’s alternative to the standard five-door 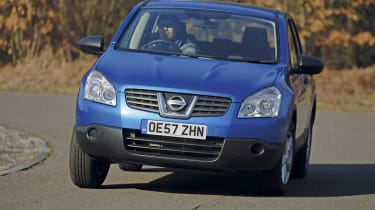 Designed to blend the agility and comfort of a hatchback with the strength and practicality of an SUV, the Qashqai is Nissan’s alternative to the standard five-door. Modern, chunky and well proportioned, it’s actually not much taller than its rivals here, but has the most road presence of our quartet.

It certainly looks like a crossover SUV, yet its height means the boot isn’t that easy to access. The tailgate doesn’t open high enough, and the 410-litre capacity can’t match the cavernous Honda’s – although the load area is the widest and longest.

From behind the wheel, the lofty driving position will suit fans of off-roaders and means forward visibility is excellent. The cabin itself is easy to live with, thanks to a simple layout, and although it’s not particularly stylish, it’s well screwed together.

While the 2.0-litre petrol model produces the same 138bhp output as the Civic, there’s slightly more torque, so it’s nippy from a standstill. But it never feels that fast, due to the CVT auto – the near-continuous acceleration takes some getting used to, and the engine sounds strained. It also posted the slowest 0-60mph time, at 9.3 seconds, while an economy figure of 30.8mpg is poor.

There are few criticisms of the car’s handling. The steering lacks feel, yet it’s fluid and direct, allowing for precise turn-in. Body control is taut – impressively so, given the Nissan’s tall ride height. As a result, the Qashqai is agile and reassuring.

Our entry-level Visia model is also the cheapest car in this test – and that’s with the CVT gearbox, which costs £1,100. Opting for the manual means you could upgrade to a mid-spec Acenta, costing £16,599. This gets you extra kit such as climate control, parking sensors, cruise control and a six-disc CD changer, and is superb value.

ACCORDING to official figures, the CVT transmission should save you 1mpg over the six-speed manual. But during its time with us, the Qashqai returned only 30.8mpg.

Nissan’s strong reputation for reliability means the Qashqai fares really well second-hand. Over the course of three years, it will hold on to 42 per cent of its value.

The Nissan is costly to maintain: three services will cost you at least £125 more than any rival. And the dealers need to improve, too, as they came 26th in our dealer survey.

WITH emissions of 189g/km, the Nissan is the least eco-friendly car on test. It sits in the 24 per cent tax bracket, and lower-band owners pay £855 a year – the highest here.